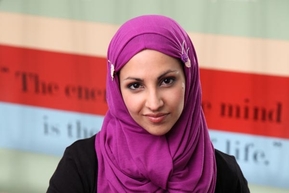 Trudi is a feisty, smart and drop dead gorgeous girl who is proud of her religion. Trudi grew up in the shadow of her wayward brother Tariq. She’s her father’s golden girl, who can do no wrong, but is perhaps burdened with her father’s elevated expectations to make up for his failings with Tariq.

She’s willing to fight prejudices and stereotyping so she can live happily as a young Muslim woman in Britain today. She’s not in your face about her religion, unlike her brother Tariq. When Trudi starts at Waterloo Road, she is mindful not to be tarred by her brother’s reputation as she gets her feet firmly under her desk. But cross her and you’re likely to get an ear full.

Initially Trudi appears to express no sexual interest in any of her surrounding male pupils and is more than happy to cut Finn and any bad lads like him down to size. However, as she gets to know Finn we see Trudi struggle to come to terms with her growing affections for him, giving us a real taste of love across the cultural divide.

In series 7c Trudi unexpectedely falls pregnant with Finn's child. Her brother warns her not to tell him and that she must 'get rid of it'. Trudi agrees to have an abortion but cannot go through with it. The week later Trudi sadly suffers from a miscarraige.