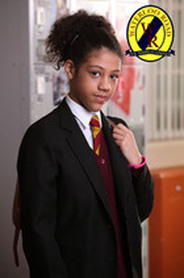 Ruth is a ‘genius’.  Homeschooled from a young age, precocious and witty; Ruth already has some A* GCSEs at the age of 13.  Her first experience of primary school was so traumatic that her parents pulled her out within days.  Since then, her parents have ‘hothoused’ her with one-to-one tuition and this is how her life has been up until she’s enrolled in Waterloo Road.

Ruth has a nasty streak and enjoys using her intellect to put others down, she sees Waterloo Road as beneath her and isn’t afraid to tell anyone.  Whilst Ruth has an IQ to envy, she doesn’t have social skills, and often disrupts classes because she feels bored.  She’s a prime target for bullying and taunting and Ruth can’t seem to gel with anyone - not even the adults who she’s used to impressing.  When her academic streaming means she’s in A-Level classes with Jonah and Jess for some subjects, GCSE classes with Finn, Amy and Sambuca and with Denzil and Em for sports and food tech, she soon discovers she fits nowhere.

Reason for leaving
Ruth left Waterloo Road when her father removed her after his son Jonah married a teacher.