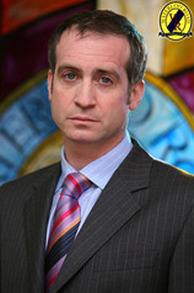 Roger is a dynamic, designer-suited Waterloo Road "old-boy" turned self-made millionaire. An undiagnosed dyslexic, he was picked on during his school days by his teachers - in particular Grantly Budgen, who accused him of being lazy and stupid. Driven by a determination to prove him wrong, he went on to become one of the richest men in the north of England.

From solid working class stock with traditional values, Roger married a "nice girl" and had a son, Brett, soon after. When his wife died tragically young it left a permanent rift between Roger and Brett, which Roger tries to heal by showering his son with money. Despite the problems between them, Roger sees his son as another one of his success stories and Brett's middle class accent a mark of his own achievements.

His plans to turn Waterloo Road into an academy within the year are for mainly altruistic reasons, but the advertising opportunity of the "Roger Aspinall Academy" is an added bonus he can't ignore.

Reason for Leaving
Livid when he discovered the truth about Davina's fling with Brett, Roger demanded that Jack sack her immediately or lose his funding. For once, Jack chose not to be blinded by Roger's money and refused. Roger was last seen storming out of the school, taking Jack's dream of a City Academy with him.