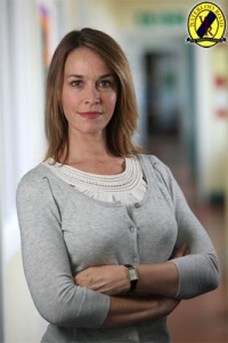 Rachel is young, attractive, sassy – and is considered by the LEA to be one of the best head teachers there is. She’s an innovator and has never been afraid to take risks to deliver quality education to the poorest sectors of society – and she has a passion for transforming the lives of working class kids. Committed to a no exclusions policy, Rachel believes that every child can be helped. Her own background as a high class prostitute turned teacher means that Rachel has daily proof that people can change.

Rachel has a wry, quick wit and makes decisions quickly and decisively – but prefers to use her powers of persuasion to win people round rather than barking orders. She likes solutions rather than problems but she will back her staff to the hilt if necessary. She can be offhand with inspectors, advisers and anyone else unwilling, as she sees it, to get their hands dirty. Rachel is very close to Kim Campbell, respecting her on a personal and professional level.

Rachel usually likes to keep her private life private but Series 4 saw her sister, Melissa, joining the staff and her nephew, Philip, becoming one of her pupils – bringing Rachel’s personal life firmly into the school. After a brief relationship with Melissa, Eddie finally came to his senses and after much will, they won’t they, Rachel and Eddie finally got together. But when Melissa returned to the school pregnant with Eddie’s child, Rachel felt she had to stand by her sister – something she couldn’t do if she was still with Eddie. An emotional goodbye means that Rachel returns to Series 5, recovered from her break up with Eddie and eager to get in to the new term and the new school.

Rachel returns to Waterloo Road with a steely determination to put the turbulence of last term behind her, now firmly back at the helm after Max Tyler was so spectacularly fired. When she is forced to save one of the pupils from their own father’s murderous intentions, Rachel realises that it’s not enough to just educate her kids – the school needs to be attending to their emotional health too. This term will see Rachel put an emphasis on her pupils’ psychological needs – whether through mentoring schemes or just healthy eating. It’s a noble cause and as term finishes Rachel will learn to her horror just how vital the scheme can be.

But it’s not all head down and hard work this term and when Rachel crosses paths with former admirer Adam he’ll start to show her just how much fun she’s been missing out on. It’s a difficult lesson for workaholic Rachel and not without its hurdles but as the end of term nears Rachel will have to settle her priorities and make some big decisions!