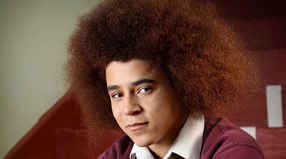 Phoenix Taylor is a year 11 fifteen year old with bags of attitude and a unique style to match. Phoenix and his younger brother, Harley, have lived with their nan since their mum died despite their dad still being alive. Phoenix has distant memories of his dad’s abusive alcoholic nature from when they all lived together.

Their nan gave the boys the care and love they needed until she fell ill a couple of years ago.  Phoenix, fearing that they would be shipped off back to their dad, stepped into the role as his nan’s main carer. Inevitably, this led to him missing time from school. Phoenix loves his nan and would do anything for her, which is why her death comes as such a blow to him.

Phoenix’s bad boy image is attractive to girls and he enjoys the attention but, because of his Nan’s influence, he actually treats girls with gentle respect. He has always had eyes for Scout but with everything that has gone on with her he's never had the chance to act on his feelings. In the final episode of series 7, Pheonix and Scout finally get together on their way to Scotland.