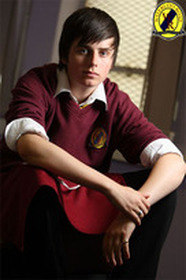 Paul’s always played second fiddle to his best mate Bolton, in both the confidence and looks department. Having lost his mother at an early age to suicide, he was placed in the care of his uncle Dermot who had problems of his own. Battling depression, Dermot was unable to cope with the burden of parenthood, and became increasingly abusive towards Paul, making his life a living hell. No longer willing to play the victim, Paul turned to Bolton for help to toughen up. However, the plan backfired and in desperation, Paul resorted to stealing a school knife which he was ready and willing to use on his uncle. Realising the situation Paul had got himself into, Eddie Lawson and Jack Rimmer were able to avert disaster and Dermot was subsequently taken to a mental health unit. His troubled childhood has given Paul a deep rooted dislike of confrontation, but that’s not to say this isn’t a young man who doesn’t know his own mind.