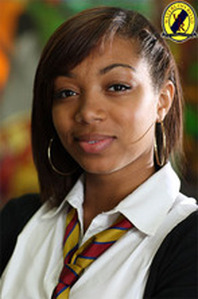 Having sworn she would leave Waterloo Road as soon as she could, Michaela was slightly annoyed to have found herself back in the sixth form but after surprisingly good GCSE results – which give away the brightness Michaela tries so hard to hide – her parents insisted she get her A Levels too. Although in the past she’s been a bully of both pupils and teachers, these days Michaela is slightly more chilled preferring to get her victims with merciless put downs – to the amusement of the rest of the class.

Beneath the hard as nails veneer Micheala is fiercely loyal to those she loves. When her brother returned from Iraq severely traumatised, Michaela was devastated. In series 4, Tom arranged a visit from the army to Waterloo Road, and Michaela saw it as her chance to humiliate them. However, she was spotted as great soldier material and was left to contemplate her future.

Michaela’s no girly girl and is more likely to be found sparing with the lads than gossiping with the girls. With her razor sharp brains and iron will, she’s capable of being Waterloo Road’s most insolent and difficult madam. This is not a girl to be messed with.