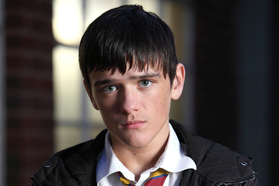 Kyle is every teacher’s worst nightmare: mouthy, disrespectful and disruptive. He honestly doesn’t give a crap which makes disciplining him a nightmare and isn’t scared of expulsion as he doesn’t want to be there anyway.  Kyle doesn’t give a shit about the police because they’re round his dad’s house all the time. There really isn’t much to recommend about this surly, aggressive child – he has none of the cheeky intelligence of Finn or the spark and potential of Ronan, and if the teachers were being honest they’d admit Kyle’s a bit of a lost cause.


Kyle is from a long-time benefit family who’ve lost their desire to get off the handouts. Mrs Stack gets what she can from the state and spends it on booze and fags – fulfilling every Daily Mail reader’s ignorant stereotype.  Mrs Stack doesn’t want a job and as such, it’s hard for Kyle to see the point in getting an education. Mrs Stack isn’t shy about blaming the school and its teachers for her Kyle’s bad behaviour, often coming to the playground to mouth off at the latest teacher who’s ‘had a go’ at her son – and then wondering why her son has so little respect for authority.


On his own at Waterloo Road, Kyle quickly assembled a gang of wannabes and did his best to spend as little time as possible at school, more concerned about living up to his local reputation by pulling crazy stunts in the local area, something that soon attracted the attention of an impressionable Denzil.  Why should Kyle try when everyone’s already decided he’s a lazy, crim-in-waiting? Series 7a, finally sees Kyle taking some responsibility when he discovers that his girlfriend’s had a baby.

After not appearing in series 7b, Kyle returns in series 7c with a vengance! He comes back with his gang, the DSC, in tow and causes never ending trouble for the school, its teachers and its pupils.