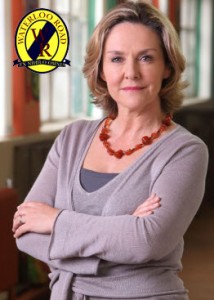 Waterloo Road has a ballsy new Headteacher; warm but disciplined mum Karen Fisher.  Karen’s top priority is encouraging well-rounded and socialized pupils, and to achieve this she wants to create a safe and positive school environment where kids can leave their troubles behind and concentrate on their schooling.  But alongside this Karen’s not afraid to discipline pupils who step out of line and her tough love policy means that exclusion is back on the table.  She will do everything in her power to help a child, but won’t tolerate her pupils using their personal lives as an excuse for disruptive behaviour.  Staff and pupils are divided over Karen’s policy, and Waterloo Road will teach Karen a thing or two about patience and tolerance before the term is out.

Karen is determined to rule by example and keep her work and home life separate, but she hides a tragic past which she and her family are struggling to come to terms with, and this will test her ethos over the course of the series.

Her son Harry (year 12) and daughter Jess (year 13) frequently make that difficult.  Last series Karen was consumed by guilt – her eldest daughter Bex had been missing for over a year and Karen’s obsession with tracking Bex down meant that she failed to notice Jess veering off the rails or Harry developing bulimia.  Even after Bex returned home (bringing her sordid past with her) Karen’s total maternal focus was on her oldest daughter – it wasn’t until Bex finally re-settled back at Waterloo Road that Karen was able to relax at little.  But with Bex now off studying at University, Karen is able to focus more attention on her younger two children and their family will grow even closer as a result.  As Karen’s chaotic home life divides her loyalties, we’ll see her place the needs of her family above those of her own career.  She’s certainly more flawed and vulnerable than Rachel Mason ever was, that said, Karen is making great changes to Waterloo Road

Series six saw Karen split with her husband Charlie after Harry discovered his father was having an affair.  They tried to give their marriage a second chance, but their relationship was broken beyond repair and series seven sees Karen back on the market and horrified at the prospect of ‘dating’ again.  However, when Rob Scotcher, the school’s new caretaker, proves so easy and laid back to be around, Karen suddenly seems more open to a new romance…