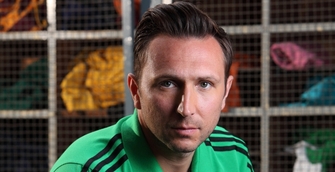 Former footballer turned PE Teacher, Jez remains a disciplined, vain, fitness-obsessed disciplinarian.  He starts up a military-style “Fit Club” – aiming to target the less healthy pupils and staff in order to shape their futures.  He proves a popular teacher with the gifted kids, but tends to overlook the weaker ones – almost bullying them into defeat when they don’t quite measure up. His ripped body doesn’t go unnoticed by the female pupils.

He’s father to Zack and Madeline ‘Madi’ from his previous marriage, which ended when he embarked on an affair with Sian at their previous school. When their affair became public knowledge, Sian and Jez quickly left the school under a cloud of controversy and hastily married to justify their actions. Inseparable, they think themselves as the ‘golden couple’, but this image proves short-lived when Jez’s ex-wife dumps their kids at Waterloo Road. Jez lacks a degree of responsibility and maturity when it comes to Zack and Madi and it soon becomes apparent that he puts his marriage to Sian before the need of his own kids.