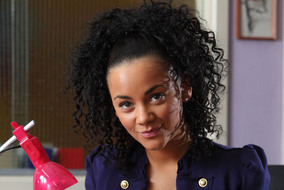 Former Waterloo Road pupil Janeece is Michael’s secretary. She returned to Waterloo Road five months pregnant (after a one night stand), and she took the job primarily for the maternity pay.

Janeece didn’t feel ready to be a mother and agreed to hand over her baby to Waterloo Road’s food technology teacher, Ruby Fry (who has since left the series) who was unable to conceive her own child. However, when little Cheryl (named after Cheryl Cole) was born Janeece realised she could never give up her daughter. Janeece has a hell of a gob on her but underneath all the bravado she nurses a heart of gold. Series 7A saw Janeece growing close to Chalky when she acted as his protector from the boisterous pupils of WR and trained him up in survival techniques.