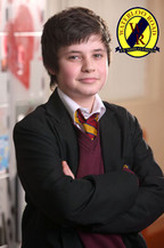 Harry, or ‘Piggy’ as he soon gets called, is self-deprecatingly funny and very witty.  He is the first to take the piss out of himself, because he’s learnt to get in there before anyone else.  With Jess, he can give as good as he gets, but in school he has learnt to mutter his snide remarks and witticisms under his breath.  Harry is intuitive and is the first to suspect his father of having an affair.

The pressure of bullying and the break-up of his family proves too much for Harry, and he begins to rely on bulimia to make himself feel better.  Karen’s quick fixes won’t work for Harry; his first step to recovery is to be honest with his mum about what’s been going on.  Karen in turn must learn to pay proper attention to his problem and get him on the road to recovery.

But his parents divorce has hit him hard, perhaps more so than his sisters. Being always considered the dependable one is a heavy burden to bear and as Karen will learn Harry’s not above a little rebellion of his own.

Reason for leaving
Harry left with his mother, Karen Fisher, when she was suspended as headteacher.