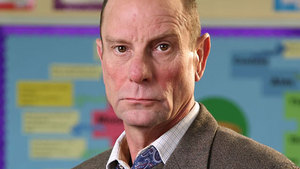 A relic of the English department and nearing retirement age, Grantly has had many years to perfect his cynical disenchantment with the teaching profession. He’s slightly scruffy, tired and lacks conviction about anything, especially since he failed to write the novel he’s always believed he had in him. He’s sarcastic but is often witty with it and his asides in the staff room often prompt a giggle from his colleagues, many of whom have a soft spot for him, particularly Steph (who has since left the series).

The only love in life is his wife, Fleur, who he adores. He has old-fashioned values and believes marriage should be forever – and after a little blip in the marriage in Series four, Grantly and Fleur realised they couldn’t be without each other.  Grantly was heartbroken when Fleur was diagnosed with Alzheimer’s in series six and tried to care for her whilst hiding his living situation from his colleagues.  When Steph returned to Waterloo Road she finally persuaded Grantly that the kindest thing he could do for Fleur was to put her in a care home. During series 7, Fluer sadly passed away. Grantly then started a relationship with the schools dinner lady Maggie.

Partial to a drink and a flutter on the horses, Grantly wants an easy life and thinks school is a much nicer place when the kids aren’t there.