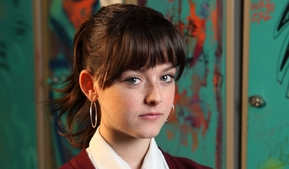 Emily (Em) is a bright girl and has always done well in school. On the day Emily joined Waterloo Road her father was stabbed to death by her older sister, Lindsey, who he’d been sexually abusing for years.  When the truth eventually came out Emily proved stronger than anyone had given her credit for and despite her timid demeanor decided to stay at Waterloo Road and carry on with her education after her sister Lindsey moved on.

Em and Denzil enjoyed a mutual crush in series four and they remain strong friends – both appreciating what it’s like to be made conspicuous in the corridors by your family situation.

Series 7 sees Em’s world thrown upside down when on the day of her sister’s release from prison, Lindsey opts to start a new life elsewhere. Smarting from her sister’s rejection, Em finds a new best friend in Scout, who is also reeling from her Mum’s continued feckless behaviour.  The two friends embark on a friendship that sees them becoming obsessively close and isolated from the rest of their class, as they discover the joy of rebellion.

Reason for leaving
When Waterloo Road was closed in series 7, Em was transfered to another school.