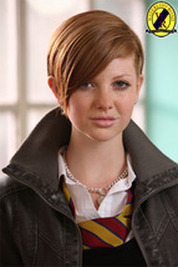 Danielle is bright but has to work for the grades that come more easily to her best mate, Aleesha. She’s opinionated, articulate and confident. She’s also pretty and image obsessed, taking a great deal of time and care over her appearance – her nails are always immaculate and she wouldn’t be seen dead at school without having given her hair the full GHD treatment. However, as she comes from a very conservative, religious family, most of the primping has to be done in secret after she’s left the house.

Danielle has an answer for everything - her tongue is sharp and often cruel. She’s got a vicious sense of humour and delights in other people’s misfortunes, partly because it helps to fuel her feeling of superiority.

Like Aleesha, Danielle’s parents are separated. Her brother, Matt, is at college in London and occasionally she goes to stay with him – returning with impressive and exaggerated tales of wild nights out in the big smoke with all her brother’s uni’ mates.