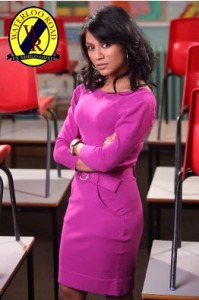 Cesca has always found teaching Spanish easy, her mother is a native Spanish speaker who taught Cesca and her three sisters the language from year dot, so she’s a natural.  Cesca teaches for the long holidays and a chance to travel the world.  Highly attractive, she’s sexually confident, and is flirty even with the students.  Her classes are bold and fun; Cesca loves clubbing but is bright and vivacious enough to run her classes the next day.  She’s young enough to burn the candle at both ends, and does her job well.  She’s compassionate and often finds herself drawn into other people’s problems, a personality trait which will find her in hot water over the course of the term.

This term challenges Cesca’s sense of right and wrong like never before as she finds herself falling in love with year 12 pupil Jonah Kirby. Though she knows that teacher, pupil relationships are forbidden, there’s something different, mature about this guy and despite herself she can’t stop thinking about him. Though she’ll try every tactic to avoid taking it further, including dating Tom, Cesca will eventually decide to give in to temptation and embark on a passionate affair. But this isn’t some casual fling and as the relationship reaches new levels of commitment Cesca will be willing to risk everything to secure their future.