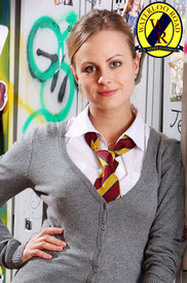 Once bubbly, happy and bright, Bex has returned to her family a hardened, world-weary young woman.   She’s seen a lot – too much – in her time away from her family, and it’s left her brittle. Bex is a survivor. Maintaining a veneer of positivity, she tries her utmost to pick up where she left off with her family.    To do this, Bex decides her best tactic is to wipe out the past eighteen months and ask mum Karen and siblings Harry and Jess not to ask what happened to her while she was away but to simply be glad she’s returned.

Bex knows that Karen will struggle with this, and is aware that her return is creating new tensions in the Fisher household, especially between her and Jess.  As Bex flounders in her efforts to establish normality back at home, her relationship with Jess deteriorates and she becomes once more the focal point for her mum’s attentions as her rows with Jess increase.

Waterloo Road offers a new hope for Bex, with its single sex segregation policy. It’s an opportunity to leave behind the seedy world of porn and Hodge, the man she met nearly two years ago who led her astray and then betrayed her.   No longer able to trust men, initially Bex will enjoy the more innocent world of all-girl classes, without the distractions/impositions of the opposite sex. Bex wants more than anything to forget what happened to her, but if she were being honest with herself, she’d admit that she really needs to come to terms with her ordeal. As Bex battles to keep Hodge away from her and her family, exposure comes from an unexpected angle when boys at school stumble across Bex’s image on the internet. With her secret out, a humiliated Bex feels she’ll never escape the mistakes of her past and decides to return to Hodge. But Karen has only just got her eldest daughter back and she certainly isn’t giving her up again without a fight. Karen doesn’t care what Bex has done – she just wants to help her get through it.

It won’t be easy, but only by coming to terms with the abuse she suffered through Hodge and his films and ultimately seeing Hodge face justice, can Bex really hope to forge a new brighter future with her family.