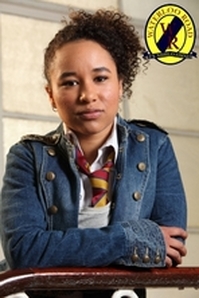 Siobhan's best friend Amy Porter is from a loving, warm, but strict home. She's a natural leader with a rebellious streak and loves the drama of confrontation. There isn't an argument Amy will shy away from or an opportunity she'll miss to take offence.

Amy is wilful, spiteful and prepared to get creative if it means getting her own way – her Machiavellian resolve often lands Amy and best mate Siobhan in difficulty. Amy clashes with Michaela not just because of the gangs but also over her crush on Michaela's boyfriend, Bolton.

If there's trouble brewing anywhere, Amy's likely to be involved at the heart of it and while she is often sorry for her actions, she sometimes repeats her mistakes.

When Finn Sharkey joined later in the series this melodramatic couple soon brought the worst out in each other and Finn eventually drove Amy to agree to suicide pact.  Chris caught them in time and in series six Amy enjoyed a quieter year – growing closer to Lauren Andrews after her and Sambuca drifted apart.  In series seven Amy really struggles to cope with Sam’s diagnosis.