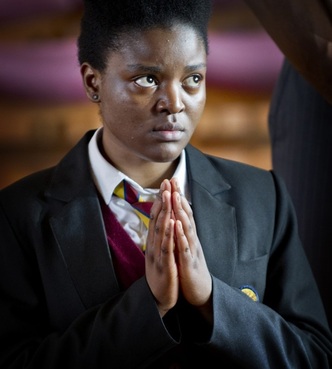 Troublemaker Lula’s home life spills into school as Tom attempts to uncover the root of her disruptive behaviour; a desperate Connor tries to out Christine’s drinking; Josh helps Tariq face up to his disabilities; and Grantly deals with a spate of graffiti at the school house.

Lula Tsibi’s homelife is far from happy. Distressed following another heated argument with her over-bearing Uncle Lionel, Lulu runs to the sanctuary of her school but her behaviour irks the other pupils and gives the teachers cause for concern.

Matters come to a head at Denzil’s commemorative ceremony when Lula lashes out at Imogen and Sian.  Far from being apologetic, Lula makes some unsettling comments about death. And later, she has a run in with Tariq, hurtfully suggesting his disability is a punishment from God.

Tom speaks to Lula’s uncle Lionel. But when Lula hears this she tells Tom her uncle plans to perform an exorcism on her believing she’s possessed. Terrified, she begs Tom to help her.

Elsewhere Connor bugs his mother to lay off the alcohol but is met with Christine’s usual hostility. Playing up in class, Connor attempts to shame Christine but it backfires and he’s humiliated in front of his classmates.  Concerned, Imogen tells Connor he can’t look after his mother forever – advice which spurs Connor to take drastic action.

Grantly is furious when his car is vandalised by Havelock kids but Michael wants to keep the peace and not involve the police. But while Michael attempts to build bridges with rival headteacher Gerard Findlay, Grantly can’t help but rock the boat.

Also this week, Josh tries to convince Tariq life is worth living, but Tariq isn’t interested and Sian receives an unexpected visitor at the gates of Waterloo Road