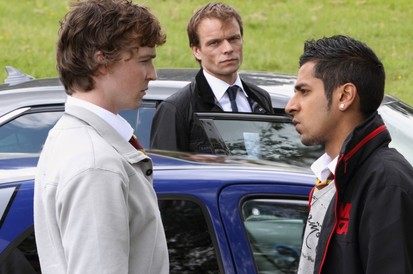 Waterloo Road welcomes the arrival of Michael Byrne: a revolutionary Super Head who famously survived a vicious attack by ex-pupil, Wayne Johnson. It’s not long before the old guards’ noses are put firmly out of joint by the introduction of a fresh team of high-achieving teachers tasked with turning the school around, including newlyweds Jez and Beth Diamond and the return of Matt Wilding. Tom suspects his chances for Deputy Head are dashed when he learns he’s in competition with Sian and Michael gets his first taste of Grantly’s cynicism when they clash over Michael’s new ‘open door policy’.

Elsewhere, brothers Phoenix and Harley Taylor’s day begins in tragedy by the untimely death of their beloved Nan, who brought them up. Determined not to be sent back to their alcoholic father, they resolve to keep her death a secret. But as Phoenix works out how to conceal her body, Harley struggles to hide his grief and it’s not long before their erratic behaviour starts attracting undue attention.

Michael leaves Tom in charge when he’s called to court to hear Wayne Johnson’s verdict and is appalled by his acquittal. Vowing revenge, Michael returns to school.

Meanwhile, Scout’s interest is piqued when she catches Phoenix lying about his whereabouts and follows him home only to discover the truth about the Nan. A traumatised Scout speaks to Tom and the secret’s out. Michael rushes to the Taylor’s home where he persuades a grief-stricken Phoenix to return to school. Social Services are called and when Michael learns of their estranged father, he seeks him out paving the way for a family reconciliation but is shocked by Phoenix’s angry reaction, putting any hope of a reunion in jeopardy.

Meanwhile, the pupils are confronted by an influx of trouble-making pupils, including ex-young offender, Tariq Siddiqui. Tensions fray when he hot-wires Ronan’s new car, but Finn’s more interested in his attractive sister, Trudi.