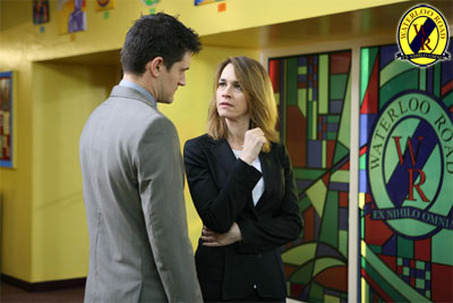 Lindsay and Emily are receiving abuse on the way to school, after it has become public knowledge that their mother has been accused of murdering their father.  Bolton and Michaela arrive at school together, and share a kiss, much to the disgrace of new John Fosters girl Amy Porter, who has a huge crush on Bolton and wants him for herself.

Emily tells Lindsay that she really wants to go to their father's funeral, but Lindsay refuses.  As Helen Hopewell arrives back at school after her fall; Lindsay plots to set out to make it seem that Michaela White pushed Miss Hopewell down the stairs, in an effort to get Michaela expelled.  Helen is still maintaining that she was pushed down the stairs by Michaela White, but Max tells that she did not actually see Michaela, and so can't prove anything happened.  Max tells Helen she needs to keep her head down and stop trying to draw attention to herself.

Max tells Rachel about the new "Youth Voluntary Action" scheme that he is planning to fundraise for, and put into place at Waterloo Road.  This is a similar scheme that Max had at John Fosters school.  Rachel is unhappy that Max is putting another scheme into place without consulting her properly first.

Ruby arrives in the staff room with a brand new organic coffee machine, and throws away the instant coffee that is already in the staff room.  Grantly refuses to drink anything but the instant coffee and removes it from the bin.  Ruby then tells Grantly that she will bet him £10 that by the end of the day she would have converted him away from instant coffee, and more towards her shots of new organic coffee.  She claims it will just take the "ten tastes test".  Grantly takes his first shot of coffee and seemingly enjoys it slightly, but refuses to show it.

Kim bumps into Tom on the stairs, and he drops all of his paper work.  She notices the picture of Tom and Josh Stevenson's mother, Georgia.  Someone has been putting the posters up all over the school for Tom to find, and he wants to try and find out who has been doing it.  Kim agrees to keep an eye out to try and help Tom.

Amy is still trying to flirt with Bolton, and tells her best friend Siobhan that she has to try and help her get him alone at some point that day.  Rachel has called Lindsay and Emily James to her office, and she offers to take the two girls to their father's funeral.  Emily reveals that she would really like to go to the funeral, and reluctantly Lindsay agrees.  Rachel tells them she will take them later that afternoon.

Steph is facing more pressure, as new head of department Jo Lipsett is overseeing one of her lessons, it does not go well for Steph as she seems to lose control of the class once more.  Jo informs Steph that she is not performing well enough.

Elsewhere, Siobhan and Amy plot a plan to get Bolton alone.  They place an out of order sign on the girls toilets, and Siobhan gets rid of Paul Langley by telling him that Mr Mead is looking for him.  Siobhan then tells Bolton that his new "girlfriend" (Amy) is waiting for him in the toilets.  Bolton enters the toilets, and Amy drags him into one of the cubicles.  She forces herself on him, and the two kiss, but nothing more.  Bolton refuses to do anything with Amy, and leaves the toilets in a rush. Siobhan sees him leave, and enters the toilets, finding Amy crying in the cubicle with a small bruise on her face.  She tells Siobhan that Bolton attacked her.

Grantly tells Steph that she should perhaps consider that Jo Lipsett may have a thing for older women, and that is why she is placing Steph under such scrutiny!  This appears to scare Steph slightly, as Grantly is made to take more shots of coffee by Ruby.

Lindsay tries to set up Michaela again, posting threatening messages in Helen Hopewell's class room, and making them seem as though they were written by Michaela.  Siobhan then enters and informs her that something serious has happened to Amy.  Lindsay convinces Amy that she needs to report Bolton for attempted rape.


Siobhan tells Lindsay that it was not attended rape, and Amy seems to agree, but Lindsay is insistent and this seems to make Amy agree.  Lindsay states that they will not let Bolton get away with this.  They report the incident to Kim, who takes Amy into her office.  Kim informs Rachel and Max of the accusation, and Max tells them that he is going to get Bolton in the office for a "grilling".  Rachel refuses to believe that Bolton would do such a thing, and Kim tells her that they may have to call the police.  Max says he does not want Rachel getting involved with interviewing Bolton and Amy, and she should focus on taking the James' girls to their father's funeral.  Rachel does not look happy with this, but agrees angrily.  Rachel tells Kim to ensure that Bolton gets a fair hearing.  As Kim takes Bolton out of his science lesson, Lindsay begins to spread around what has happened.

Amy and Bolton are both interviewed, Amy by Kim and Bolton by Max.  Max seems to not believe or trust anything Bolton says, and accuses him of raping Amy.  He then sends Bolton to the cooler following a shouting match between the two.  Amy lies to Kim, and makes out that Bolton raped her in the girls toilets.  It seems that Bolton is being treated as "guilty until proven innocent".  Elsewhere, Michaela hears the news of the accusations facing Bolton, and immediately fears the worst, fearing that Bolton has indeed raped Amy. Candice is also informed by Kim, and she also appears to not trust Bolton. Paul is the only one who seems to stick by Bolton.  Amy texts Siobhan asking her to lie to back up Amy's story, but Siobhan refuses.  Paul tells Kim his version of what happened, but makes things worse when he makes it appear that Bolton bragged about having sex with Amy.

When Bolton is informed that the police will have to be called to get to the bottom of this, he freaks out and runs out of the cooler.  He locks himself into Kim's office with Amy and refuses to leave until she admits what really happened.  Outside, Kim and Max are trying their best to get into the office and the police eventually arrive.  When they do eventually get in the office, Amy admits that she was lying because she wanted to get back at Bolton for refusing to go out with her and the police are turned away.  Michaela tries to apologise to Bolton, and tells him she will sort Lindsay out.  Bolton reacts angrily and says all this only happened because of the "stupid girl gang crap".  He refuses to get back together with Michaela.

Rachel takes Lindsay and Emily James to the funeral, and this leaves Max in sole charge of the school.  He starts his first voluntary action scheme meeting, and has a disagreement with Denzil Kelly.  Denzil tries to walk away from the scheme, as it is voluntary, but Max refuses to allow him, and by way of punishment informs Denzil that he must scrub the playground clean on his hands and knees.  As Rachel returns to the school following the funeral, she tells Denzil to stop doing it and go back to his lessons.  Later that day, Max does not look impressed that Rachel has counter acted one of his decisions.

Meanwhile, Grantly continues to take the shots of coffee from Ruby, but then starts to feel the effects later that day in the toilet!!

Kim sees Josh putting up the pictures of Tom and Georgia, and informs Tom who looks very confused.  He later confronts Josh at the end of the school day, and he tells Tom that the Georgia in the picture is his mother, and that Tom is his real father!!  Tom looks visibly shocked and perplexed at this!

Lindsay is seen back at her father's grave, where she picks up all the flowers that have been left and destroys them.

Max thanks Kim for all of her efforts today, and then asks her if she would like to go out for something to eat with him.  Kim agrees, and they go to dinner together.  Max tells Kim she is fantastic, and Kim asks Max if he wants to come back to her place