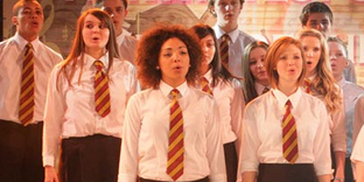 It’s the end of term and everyone is excited about Waterloo Road being in the final of the North West Schools Choir of the Year competition, especially when the local news turn up to do a feature. Strangely, Flick seems subdued and reluctant to draw any attention to the lyrics she wrote for the song. Matt meanwhile is working himself into a state – if only he had another two weeks worth of rehearsal time – but calms down quickly when Steph threatens to lock him in a cupboard again. Away from the choir, love is definitely in the air. Kim is crashing down to earth after a week spent with Andrew and – although she tries not to show it – is devastated at the prospect of him flying back to Rwanda that afternoon. Eddie is also loved-up and sneaks into Rachel’s office with a surprise present. He is totally gobsmacked to find Melissa waiting for him, and is in for a further shock when Melissa reveals that she’s pregnant and that the baby is his!

Chlo and Donte cause a stir when they turn up at school with baby Izzie in tow, both incandescent with happiness. It couldn’t get any better than this, could it? The icing on the cake arrives in the form of a letter that Donte has been hiding from Chlo – it’s from Manchester University and she’s been accepted! Donte is stunned when Chlo announces that although she’s made up with the news, she’s decided to give Uni a miss for the time being. Tom’s plans for a once in a lifetime trip to the Great Wall of China are put on hold when Chlo fills him in on her decision. He tries his best to make her change her mind, promising that he’ll be there to help her and Donte look after Izzie, but it all sounds too much like hard work to Chlo, not to mention the long journey to and from Manchester every day – she doesn’t want the first few years of Izzie’s life to be such a struggle.

Eddie isn’t the only one who’s shocked by Melissa’s surprise reappearance. Phillip is furious – he hasn’t heard from her in months, and now she turns up with a bun in the oven, humiliating him once again in front of everyone. Rachel responds by ordering Eddie to get lost somewhere and calm down, and then pulls Melissa into her office, demanding to know why she left it so long to get in contact – clearly she wanted to wait until she could make the most dramatic entrance possible. She warns her that whatever she has planned, it isn’t going to work. Melissa shrugs this off, convinced that Eddie isn’t going to turn his back on her, or his child. Realising that nothing she can say is going to prick Melissa’s self-congratulatory bubble, Rachel tells her to go and find Phillip, apologise to him, and then leave. Once Melissa is gone, Eddie desperately tries his best to reassure Rachel that nothing need change between them, but she isn’t so sure.

Rachel barely has chance to draw breath before she’s launched into another crisis. A man called Bill Willis has turned up out of the blue to accuse Waterloo Road of ripping off one of his poems to use as the lyrics for their song. He threatens to sue if the song is performed in public again. Unable to risk the reputation of the school, Rachel feels that she is left with no choice but to withdraw the choir from the competition. Matt’s gutted and can’t bear all of his and the choir’s hard work to go to waste. Flick is now public enemy number one as far as the choir is concerned, even Marley feels betrayed. Flick meanwhile finds comfort in the unlikely form of Phillip who tells her to stop feeling sorry for herself and face up to her actions. Feeling buoyed up by his own conviction, he stands his ground when Melissa catches up with him and tells him that they’re leaving. He refuses, telling her that the only place they’re going is the nearest police station.

Just when it looks like things couldn’t get any worse, Ralph turns up at the school in a towering rage having just been on the receiving end of a restraining order. He’s lost his job and his daughter, and blames Rachel – if she hadn’t allowed Marley into Waterloo Road, none of this would have happened. Eddie steps in and orders Ralph off the premises, but not before he promises Rachel that he’ll make her pay. Although Flick is shaken, at least the confrontation with Ralph has caused the rest of the choir to rally round. Back in the staff room, Steph does her best to cheer Matt up. In the end, it’s Grantly who inadvertently comes to the rescue by coming up with an off-the-cuff rhyming complaint about the school. She turns to Matt – they have the music and the harmonies, all they need is lyrics - why not give it a try? Rejuvenated, Matt sprints for the bus – he’s got a competition to win!

The Waterloo Road choir are up against stiff competition, including their rivals from last year’s spelling bee, Forest Mount. Fortunately, the kids are all too involved in trying to cobble together a new set of lyrics to feel too nervous. With everyone pitching in, the new lyrics practically write themselves... only problem now is, how on earth are they going to memorise them in half an hour? Back in the auditorium, Rose is pleasantly surprised when Tom turns up and announces that he’s not going to China after all – he’s going to need his money to pay the mortgage he’s just arranged on a flat in Manchester for Chlo and Donte. Backstage, time has just run out. After an emotional introduction from Rachel, the Waterloo Road choir take the stage. There’s a vast cheer when the choir strip off their blazers after the first verse. Matt’s counterpart from Forest Mount is very unimpressed. Luckily, he’s standing too far away to notice that the kids are reading the new lyrics off the backs of each other’s shirts!

To say that Eddie isn’t happy about the thought of his child being born in jail is an understatement, but Melissa is determined to prove herself to Phillip by handing herself over to the police. She gets as far as the front door of the local station before getting cold feet – she can’t do it. She begs Phillip to forgive her, but he’s had enough and storms off. Eddie is setting out the drinks for the sixth form leaver’s party when Phillip turns up at the school. Both are stunned when Melissa arrives, fresh from making a statement at the police station. Eddie is doing his best to reassure Melissa that he’ll find her a good solicitor when he hears a noise outside. It’s Ralph. After being turned away from the school, he headed straight for the pub to hatch his revenge. After several pints of Dutch courage, he’s stolen a digger and is heading straight for the school! Having been alerted by Ralph, Rachel arrives in time to see him plough into the front entrance. With Eddie and Melissa yelling at her to stop, she steps in front of the digger.

Against the odds, the Waterloo Road choir win the competition. Matt is in orbit, the kids are ecstatic, and up in the audience, Kim is on the receiving end of another fantastic surprise when she turns around to see Andrew standing beside her – he just couldn’t leave her. They seal the celebration with a kiss and across the auditorium; Tom and Rose do the same. Back at the school, Rachel’s distraction gives Eddie chance to sneak up on Ralph. He knocks him out with a punch and then steals the keys to the digger. As the police arrive to take him away, Rachel hugs Melissa and then turns to Eddie – she can’t be his girlfriend, Melissa’s sister, the baby’s aunt and stepmum, it’s just wouldn’t work. They can’t be together anymore. Eddie knows that she’s right, but it doesn’t stop him from loving her. He also knows that he won’t be able to stay at Waterloo Road any longer. Tearfully, Rachel agrees and walks away.

The bus arrives and the once jubilant kids stumble into the playground, stunned when they see that the school is in ruins. Sam steps forward and brandishes the trophy – Waterloo Road has won – but is quickly shot down by Janeece who tells her that there is no Waterloo Road, not now. Rachel disagrees. If they’ve proved anything today, it’s that the school isn’t just a building – it’s all of them: the pupils, the teachers and her, the Head. As the kids and teachers gather around to show their support, Rachel looks over at the lonely figure of Eddie standing in front of the ruins of her school...