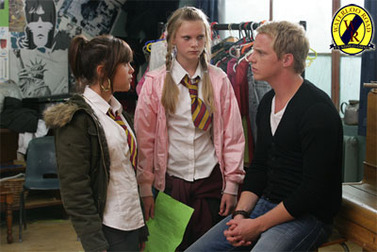 Kim is on a mission to put a stop to the amount of sexual imagery the kids are being subjected to via the media. She takes control of a sex education lesson, but gets more than she bargained for with Bolton – if he’s making sly digs about Phillip’s obvious lack of sexual experience, he’s accusing Michaela of sleeping with every lad in the school. Michaela finally reaches the end of her tether and stuns everybody by standing up and publicly admitting to being a virgin. As she is greeted by a round of applause, Phillip sees his chance – maybe he’s got nothing to be ashamed about. However, although Michaela is confrontational and unselfconscious enough to make such an admission, Phillip is not. His confession is greeted by laughter and howls of derision, particularly from Paul and Bolton. Feeling embarrassed and humiliated, Phillip decides to cancel his birthday party.

Marley is still desperate to win Flick back and his persistence finally pays off when she agrees to start seeing him again. Rose is adamant that she’ll find the £5,000 to pay back Ralph, but it soon becomes clear that she’s struggling to get her hands on that sort of cash. Eventually, she’s forced to tap Tom for a loan. After hearing his mum’s assurances that she’ll find the money, Marley feels confident enough to pay a visit to the police station and have it out with Ralph – he’s made a mistake and wants to pay back the £5,000 – he and Flick love each other and there’s nothing Ralph can do to keep them apart. Ralph plays along, but then tells Flick about the bribe Marley took not to be involved with her. Flick is heart-broken. Horrified with both of them, she flees in tears.

Matt is determined to get a choir together to represent Waterloo Road in an upcoming competition. Somehow, he ends up agreeing to give an impromptu performance for Rachel that afternoon, only problem is; he hasn’t exactly put the choir together yet! Keen singer Sam is hugely excited when she sees one of Matt’s posters and employing a combination of threats and blackmail, she and Lauren manage to gather together a big enough group of pupils to attend the first rehearsal. Matt is left deflated when it transpires that most of the kids are only present under sufferance, and with the genuine choir members being a measly few, the race is on to recruit and regroup. Sam’s persistence and enthusiasm eventually pay off and Rachel is extremely impressed.

Kim feels awful when she hears that Phillip has cancelled his party and seeks him out at lunchtime. He’s feeling very sorry for himself, but perks up when Kim suggests that the opportunity to go to a party at the head teacher’s house might prove extremely popular. Kim also hands Phillip a stack of STI leaflets to hand out – maybe if the rest of the kids see the risks involved in sleeping around, they’ll be less inclined to take the mickey. Of course, the leaflets end up falling into the wrong hands and it’s not long before Lauren’s mum rolls up at the school, demanding to know why such material is being distributed to her underage daughter. Kim is dragged before Rachel and Eddie to explain, but by then she has more important things on her mind...

In the playground, Steph wonders why a stranger would be taking photos of Kim’s baby Grace. It appears that the Home Office have hired a Private Investigator to track Kim, and she is forced to come clean to Steph about taking Grace from Rwanda and smuggling her back into the UK. Although Steph is shocked and disapproving of Kim’s methods, she can understand her motives and offers to take Grace away for a while until the dust settles. Later, Tom meets Rose after her AA meeting. Despite promising Davina that he’ll be home in time for dinner, he forgets. It is slowly becoming clear to Davina that she is no longer Tom’s first priority and when he arrives home, he gets the cold shoulder.

At Phillip’s party, Bolton is tasked with making sure that nothing goes awry as Rachel and Eddie head out. With the adults out of the way, the drink starts flowing and the party is soon in full swing. As Phillip makes valiant efforts to chat up the girls without boring them to sleep, Bolton prowls around the house, chucking out anyone who looks like they’re having too ‘good’ a time. Bolton is also growing increasingly frustrated with the attention Janeece and her breasts are getting and when a couple of blokes offer her VIP tickets for a club in town, it’s the last straw. Flick meanwhile is determined to drown her sorrows and seeks comfort from an unlikely source – Phillip. Upstairs, Flick is keen to give Phillip a birthday present he’ll never forget, but he quickly realises that it’s a step that neither of them is really ready to make and declines her offer...