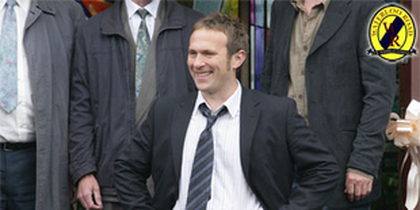 Jack and Waterloo Road are in the media spotlight yet again as he speaks to reporters about Chlo's disappearance. The staff and pupils have set up a full-scale campaign to find Chlo and are using every means possible to spread the word to try to find her. Even Donte, who is still nursing a broken heart, needs to know that Chlo's alright and steals Lewis's moped to go and find her. Meanwhile, Brett feels terribly responsible about the whole situation and sets up a 'Find Chlo' website. Mika looks on in disdain. She's still angry at her sister for sleeping with Brett and, much to Tom's distress, does not care in the least that Chlo has run away. But then Lewis starts spouting terrifying statistics about runaway kids and Mika is left horrified after a spot of research on the Internet. In the end, it's Jack who talks her round, pointing out that Izzie would have loved her and Chlo whatever they'd done.

Jack is desperate to win Davina back. Although she defends him against gossip and rumour in the staffroom and clearly still loves him, the pain is too much - why did he sleep with a desperate middle-aged woman when he had her? Jack's day gets worse when he spots a mass of new graffiti in the playground - it's another Bolton Smilie special! He's come to the end of his tether as far as Bolton is concerned and tells his mum, Candice, that he's going to transfer him to another school. Candice is furious and goes straight to Eddie - it's bad enough that she didn't qualify for the Â£2000 single-parent bursary, but now she also has to deal with the prospect of bussing Bolton halfway across town to another school. Eddie has no idea what she's talking about - what bursary? He immediately questions Jack and discovers that he's been fixing the school intake, attracting G&T kids by offering their single mums money from the Excellence in Cities grant to send them to Waterloo Road. Eddie can't support Jack's methods and their confrontation spills out into the corridor, overheard by Steph, Janeece, and Maxine.

Grantly is also up against it. He is sinking deeper and deeper into debt and his 'bedridden' wife, Fleur has no idea about the financial mess they are in. With unopened bills mounting up and Tom agitating for his £500 back, gambling seems to be the only way out. Grantly's luck may be on the verge of changing for the better when he receives a red-hot tip for a race that afternoon. He offers Lewis a share of the winnings if he'll put the bet on for him. Later, he listens to the race on the radio and is ecstatic when his horse romps home - he's won £2000! But relief turns to despair when Lewis turns up with some bad news; he was unable to put the bet on because Donte had stolen his moped. Despondent, Grantly turns home, just in time to open the door to the bailiffs.

Ria Cheetham makes a surprise return visit to the school, and Jack is forced to confess that he's manipulated the budget for a second time. To Jack's surprise Eddie suggests Ria meet some of the G&T kids, when they wholeheartedly support him (well almost all) he's delighted, feeling he's off the hook. Despite this, Ria can't overlook the fact that Jack's use of the money was wrong, she calls an emergency School Governors meeting for that afternoon. Despite Jack's impassioned speech - he just wants to be the head of a successful school - the meeting does not go at all well. However, strong support comes in the form of Eddie who vigorously backs Jack, he's proud to be his deputy. But Jack's oratory can't save him and he's told to clear his desk, enquiry pending. Jack's had it - no need to suspend him - he'll resign.

Rehearsals for the musical take a turn for the worse when Brett tells Matt he can no longer be part of the show. His personal life is in such a mess he just can't concentrate on it. The news is a huge blow for Matt leaving the future of the musical hanging in the balance. Meanwhile, Tom's pleased when he hears Jack's leaving, but begins to change his mind when Davina informs him that there's a lot he doesn't know about Jack, like he spent all summer in therapy trying to get over Izzie's death, and that he blames himself and wishes he'd been stabbed instead of her. As Jack prepares to leave, Tom approaches. The two men finally make their peace.

Janeece and Maxine are aghast when they discover the news about Jack and quickly set about rallying the pupils. Before long, there are a gang of angry kids blocking the main entrance, refusing to allow Ria and the governors to leave. Jack appears. He's incredibly touched by the display of support, but insists that the governors are allowed to pass. As they are booed out of the grounds, he turns back to his pupils and tells him that he's proud of every single one of them - he couldn't have wished for a better bunch of kids. It's an emotional moment as the kids line up to say farewell and to thank Jack for believing in them. Even Brett's willing to suspend hostilities in order to say goodbye and wish Jack luck. All that remains for Jack to do is say goodbye to Davina. He tells her she's got what it takes to be a great teacher - she's passionate, intelligent and, unlike him, hasn't gone a cynical bone in her body. She's unlike any woman he's ever met, and he's been a total fool.

Jack takes one look around before he climbs into his car and leaves Waterloo Road for good...