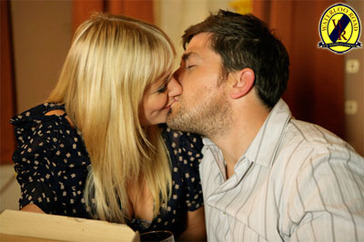 Just before the start of school, Michaela White and her friends bully Shane Warwick into stealing from an open car window. Shane's reluctant and the girls are just about to give him what for when Jasmine rounds the corner on her way to school. Without stopping to think, she intervenes, roughly handling Michaela in order to rescue Shane. Once at school, Jasmine reports the incident to Tom who ends up firmly caught in the middle - he wants to support Jasmine, but she's lost her temper with a pupil and may have crossed over the line. Tom is concerned when Shane denies Jasmine's claims that he was being bullied - it was Jasmine who assaulted Michaela! Jasmine's horrified when she realises that Tom may doubt her word, and even worse, has involved Rachel.

Eddie arrives in his 4x4 gas guzzler to much condemnation from Mika - how many herds of wildebeest and mountain tracks does his have to negotiate in Rochdale? Seeing an 'in' with Mika, Brett wholeheartedly agrees with her - Eddie's flash 4x4 is obviously a phallic extension - and when she accuses him of hypocrisy, declares he's going to ditch his own jeep... only he's not going to sell it on, he's going to have it crushed! When the pick-up truck arrives to take it away, Mika can't hide her delight. Brett's ears prick up when Mika announces that she's going to start cycling to school, only thing is, her bike's a wreck - maybe she could start using her mum, Izzie's old bike? Brett offers to help her fix it up... maybe he could pop round after school so that they can make a start?

Rachel is worried that Stuart Hordley has already done a runner before the building work has even started. There's still no sign of his builders and he's refusing to answer her phone calls. On top of all this, Eddie has noticed the inactivity on the site and is beginning to get suspicious. Just as Rachel is beginning to despair, Hordley strolls into her office. He wants to take her out to dinner and explain why he blackmailed her. How can she refuse? He's got her over a barrel. On his way out of the building, Hordley runs into Steph who manages extract a pledge of £2000 from him towards the school's funds. Later, Steph passes on the good news to Rachel who takes it all with a pinch of salt - £2000 eh? That'll just about cover the cost of the huge cross-channel phone bill Steph has racked up sweet-talking Claude, her French businessman. Steph assures her that it'll all be worth it when the money starts to flow.

Grantly has aspirations to climb the greasy pole and goes to offer his services to Rachel - if someone like Steph can be made Financial Director, the sky's clearly the limit. He's well gutted when Rachel tells him that her plan is for him to teach ballroom dancing to the Lessons for Life kids - discipline and exercise, just what they need. Grantly recruits a reluctant Steph as his waltz partner and, after rushing her through the steps at lunchtime, drags her off to the drama studio to dazzle the kids. Unsurprisingly, the kids ain't dazzled - ballroom dancing is for poofs and no way as hard as hip hop. Bolton is quite willing to demonstrate and then immediately throws down the gauntlet to Grantly. To his utter amazement, Grantly takes up the challenge and stuns everyone as he spins and flips to a 1950's tune. Flushed with success, Grantly asks Steph if she'll be his partner in an upcoming over-45's dancing competition. Steph's livid - over-45's? How dare he!

After seeking out Shane and failing to get him to tell the truth, Jasmine runs into Michaela in the corridor. Before she can stop herself, she's telling Michaela, in no uncertain terms, what she really thinks about her. Michaela is furious - she's not taking that from anyone - and persuades one of her cronies to punch her in the face. Later, she appears in Rachel's office, sporting a cut on her cheek and claiming that Jasmine punched her. Eddie doesn't believe a word of Michaela's story, neither does Union rep Grantly who quickly points out that the written statements given by Michaela and her gang are all identical - they've even misspelled the same words! Faced with Michaela's angry father, Rachel feels she has no choice but to take formal action. Despite Eddie's protests, she suspends Jasmine with immediate effect.

Davina asks Tom if he's up for going out, but he's already promised to take Chlo and Mika out for a pizza... maybe she could join them? Later that evening, Tom feels awkward when Davina arrives at the house. He explains that Mika and Brett are holed up in the kitchen repairing Izzie's old bike and that they'll be ordering pizza in instead. Although Mika is clearly unhappy with Davina's presence, Chlo is supportive - if anyone deserves a bit of happiness its Tom, especially after everything he's done for her and Mika. As Tom, Davina, and Chlo settle down in the living room, Mika and Brett are getting closer in the kitchen. Sensing that the old chemistry is back, Brett makes a point of telling her what a fool he's been and asks what he needs to do to deserve a second chance. Mika doesn't even have to think - she wants commitment... but not quite in the way Brett thinks. If he's so determined to prove himself, then he can help her take on Eddie and force him to get rid of his 4x4.

Blissfully unaware of Mika's animosity, Eddie meets up with Jasmine in the pub. He's stunned when she tells him she's resigning and tries to get her to change her mind - he's sure that one of Michaela's cronies will fold under pressure sooner or later. However, he's in for a huge shock when Jasmine reveals that she used to be a bully herself. She knows from her own experience that Michaela and her gang will never crack...