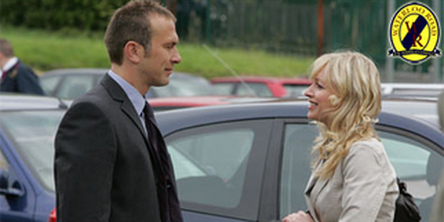 The atmosphere is tense at Izzie and Tom's house. They all feel uncomfortable with Lorna hobbling around. Tom isn't convinced for a second by Lorna's butter wouldn't melt attitude and is sure that she threw herself down the stairs on purpose. Meanwhile, Mika has fallen out badly with her supposed best friend, Leigh-Ann, the constant digs about her home life are bad enough, but they're nothing compared to the Internet hate site that's suddenly sprung up out of nowhere. Leigh-Ann is jealous of the attention Mika has been getting from Brett and is determined to run her out of Waterloo Road. With Izzie and Tom so focussed on the Lorna situation, Mika has no one to turn to.

Jack is furious Andrew has accepted the position of Acting Head - and stabbed him in the back to side with Roger. But Jack's not the only one with issues - Kim makes it very clear whose side she's on - thanks to Andrew and Roger's zero tolerance campaign, there's a gang of unruly teenagers prowling around the local area under the evil influence of ex Waterloo Road pupil, Lewis Seddon. Andrew soon realises that his new initiative is causing a backlash in the community. Local shopkeeper, Mr Patel is at the end of his tether and, after his shop is pillaged once again by Lewis and his mob, he decides to take his protest all the way to the school playground. With the local press on the warpath, the newly appointed Andrew has to go cap in hand to the only man he knows can deal with the situation, Jack.

Janeece is annoyed when Andrew confiscates her mobile phone and immediately steals it back. Donte is hugely amused by the situation and decides to wind Janeece up by ringing her phone just as she's walking past Andrew. Thanks to his zero tolerance stance, Andrew feels he has no choice but to exclude Janeece for stealing from his office. Kim is horrified by this turn of events - in the past year, Janeece has managed to turn her whole life around and exclusion would put her right back at square one. Meanwhile, Donte is feeling just as miserable as Janeece. Thanks to his prank, Chlo is no longer speaking to him. Determined to put things right, he comes clean to Andrew and hands over his own mobile - if Janeece is going, he is too. Realising that Kim is right, Andrew backs down.

As part of Roger's new regime, Grumpy Grantly has been ousted from the school and Tom's annoyed - it means more work for him. However, it also means that there's a vacancy for a new Head of English and he's gutted when Lorna is given the job. Lorna's made-up. Not only is she now Tom and Izzie's boss, she's also convinced that Andrew fancies her! Meanwhile, Grantly has decided that he's not going to go quietly and has taken his case to the Union. He wants reinstatement, compensation, and a personal apology from Andrew. There's more chance of hell freezing over as far as Andrew's concerned.

When Leigh-Ann threatens to put compromising pictures of her up on the Internet, Mika flips and slaps her round the face. The incident is witnessed by Kim who is shocked and concerned, not least when Mika announces her intention to drop out of sixth form. Steph has also noticed the friction between Mika and Leigh Ann, but she suspects that something very sinister is going on. Over half a pint of cider in the pub, she manages to extract the whole story. Having been bullied herself at school, Steph is supportive and sympathetic. She's also determined to teach Leigh-Ann a lesson she'll never forget... just what has she got planned?

Andrew is now feeling disillusioned with Roger's way of doing things. Not only has the fat cheque that Roger promised not arrived, but it's also becoming increasingly clear to him zero tolerance just isn't working at Waterloo Road. On top of this, Roger has taken an instant dislike to Kim and her outspoken attitude and is threatening to send her straight out of the door after Grantly. Andrew is finally forced to put his foot down. He no longer feels he can support Roger's regime and resigns as Acting Head. Kim, however, is totally unimpressed and firmly rebuffs Andrew when he asks her to go for a drink. They part on frosty terms.

Tom has finally had enough of Lorna living in the spare room and chucks all of her belongings into a bag. But while he's ranting and raving, Izzie has noticed that Lorna doesn't look too well at all. Tom's convinced that it's just another ploy for attention, but Izzie thinks it might be a bit more serious than that. Meanwhile, Jack takes Davina out for a cosy drink after work. It's going swimmingly, and set to go even better when Jack receives a call from Roger offering him his old job back. But that's not all... Davina has a bombshell of her own to drop - she's not sure where Roger's getting the cash to pay for the new Academy, but it certainly isn't from his factory.