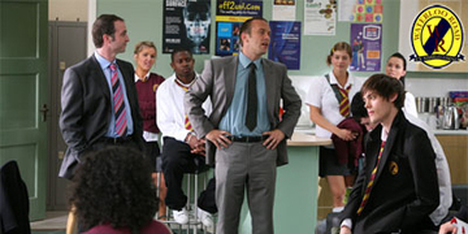 It's a new term at Waterloo Road and things are looking positive. The School is launching its first sixth form, and ex-pupil and wealthy entrepreneur Roger Aspinall wants to turn the school into Rochdale's first City Academy in return for a seat on the governing body. But Roger's investment causes deep divisions between the teachers, especially between Andrew and Kim. Andrew is thrilled to be back at work after the long summer holiday, he's also a firm supporter of Roger's - anything to improve the facilities and give the kids a better education. However, Kim is deeply pessimistic about the whole idea. She doesn't think it's fair that some rich bloke can just swan in off the street and buy a slice of the school.

Izzie and Tom are happily living together and thrilled to be expecting a new addition to their family. Even Izzie's teenaged daughters, Chlo and Mika, have adjusted to having another teacher about the house. But Izzie and Tom get a shock on their first day back at work when they run into Lorna - they thought she'd left to start a new life in Australia. Lorna seems cheery and reassures Izzie she harbours no ill-feeling towards them. But Tom smells a rat; he can't believe that Lorna is being so nice - she must be up to something.

Jack is trying his best to roll with the changes, not least because his temporary contract as Head is up for renewal, but he's quickly losing patience with Roger's constant interfering. Roger is livid when he discovers that his old English teacher, Grantly Budgen is still around. Grantly made his time at Waterloo Road a misery and he's determined to get revenge. This is the last straw for Jack - he can't sack a member of staff just because Roger doesn't like him. However, Andrew is very quick to turn the knife and its music to Roger's ears. Meanwhile, Grantly sinks one too many drinks at lunchtime and returns to school in a belligerent mood. He is soon the first casualty of Roger's arrival when he storms out of his job.

New student Brett is breaking hearts on his first day at school. He's good-looking, intelligent, and the son of millionaire Roger Aspinall. Mika takes an immediate shine to Brett - her school term is looking up already. She's thrilled when he invites her round to his massive house after school, but her excitement quickly fades when she finds out that her best mate, Leigh-Ann, has also been invited. Leigh-Ann's determined to bag Brett for herself and quickly resorts to dirty tricks. After getting Mika drunk, Leigh-Ann starts to strip off. Although she's uncomfortable, Mika tries to join in with the others but she gets tangled up in her top. Opportunistic Leigh-Ann pulls Mika's bra down and takes a photo on her mobile.

New PA Davina Shackleton makes a very good impression on her first meeting with Jack by organising his disaster-zone of an office in five minutes flat. But Davina is Roger's appointment - could she be a spy in the camp? Meanwhile, French teacher Steph is desperate to pursue a proper relationship with Jack - she did save his life after all. But, just when it looks as if Jack could be giving into her charms, they are interrupted by the phone. It's Roger and he's about to drop a bombshell. The governors have decided to make Andrew Acting Head! Meanwhile, Andrew finally gets to take Kim out for an intimate dinner. But the mood is broken when Andrew is forced to admit that he's Waterloo Road's new Head. Kim can't believe that Andrew could stab Jack in the back like that. After telling him exactly what she thinks of him, she storms out.

Izzie is shocked and guilt-stricken when Lorna confesses that she tried to commit suicide by jumping in the canal. She feels even worse when she reveals that she and Tom are expecting a baby. Lorna takes the news surprisingly well, but it could be that her blasé attitude is hiding an ulterior motive. Before long, the B&B Lorna is staying in conveniently floods, and who should she turn to but her best friend? Tom tries to put his foot down, but Izzie's already over-burdened conscience won't allow her to leave Lorna on the streets. Before long, Lorna is installed in the spare room and showing every sign of becoming a permanent fixture... especially when she 'accidentally' takes a tumble down the stairs.