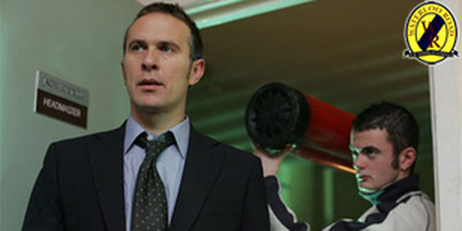 Kim has been severely traumatised by the incident with bully Lewis. She finds the strength to talk about the incident in front of the committee, but loses patience when it becomes obvious that the panel are favouring Lewis's version of events. With his obnoxious loud-mouthed mother backing him up, he tells the committee that it was Kim who was coming onto him! Jack senses that the committee are on the verge of overturning his decision to expel Lewis and blows his top. Not only is Kim Campbell the best teacher he's ever worked with, she is respected and trusted by the pupils - she is Waterloo Road.

After the shock of finding Tom and Izzie together in the drama room, Lorna needed to take some time off work in order to recover. However, she's back and determined to make sure that everyone in the staff room knows what's been going on between her husband and her best friend. Having been pre-warned by Tom, Izzie arrives prepared for trouble, but even she is shocked when Lorna slaps her round the face. Tom is furious, but when he confronts Lorna she makes it clear that she's not interested in anything he has to say. She's putting on a tough face, but beneath her cool exterior she is devastated by the betrayal.

Chlo is terrified - she's due in court to give evidence against Donte today. Still reeling from another confrontation with Lorna, Izzie makes her promise that she will tell the absolute truth when she takes the stand, however terrifying. Donte is also scared, he is very aware that his future teeters on a knife edge and, when Holly gives her evidence naming him as the driver of the car, things begin to look very bleak indeed. But then it's Chlo's turn to give evidence and she stuns everyone by revealing that she distracted Donte when he was driving and that it was this that caused him to lose control of the car. However, the prosecution barrister rips her testimony apart, leaving Donte looking even guiltier.

Heather Davenport puts her job on the line by revealing the findings of the committee to Jack. Despite the lack of evidence, they have decided that they believe Kim's version of events. Although relieved at first, Jack can't believe it when he hears that Lewis will only be excluded for fifteen days. When Heather tells her that the committee believe that she had an ulterior motive for taking Lewis to the cooler, Kim decides that she's had enough and resigns there and then. When Andrew fails in his attempt to talk Kim round, Jack decides to take matters into his own hands and sends a letter home with every pupil, hoping to rally the parents in support of Kim.

After a lot of soul-searching, Lorna writes letters to Tom and Izzie, telling them that she forgives them and that she wants them both to be happy. Mika and Chlo also want their mum to be happy and urge her to take a chance on Tom. Although she's happy for Izzie, Chlo is preoccupied with the prospect of being sent to jail. It's the moment of truth in the courtroom and she listens on in horror as the jury return with a guilty verdict for Donte. Yet all is not lost. The judge is convinced that both Donte and Chlo are punishing themselves a lot more effectively than a prison term ever could and gives Donte a suspended sentence. At first, Donte is ecstatic, but this all changes when Adam's parents refuse to talk to him. At least he still has Chlo though, and not even Izzie can find it in herself to object when she watches the young couple exchange rings.

The Waterloo Road parents have come up trumps and Jack calls Mrs Seddon into the school to show her some of the responses he has received. He now has all of the evidence he needs to prove that she is committing benefit fraud and threatens to blow the whistle on her if she doesn't remove Lewis from Waterloo Road. Lewis swear revenge when his mum caves in. Although he's managed to rid the school of Lewis Seddon, Jack still doesn't know if his efforts have been in vain. Tensions are running very high when Heather arrives with the LEA's verdict. Its good news - he's won, Waterloo Road has been saved!

Andrew arrives on Kim's doorstep with both pieces of good news, but his euphoria quickly fades when she stands by her decision to leave teaching for good. Andrew does his utmost to persuade her otherwise, ut Kim has made her mind up and refuses to budge... right up until the moment when Andrew kisses her. Realising that she's not going to get rid of him, she agrees to give teaching another go... as long as he promises never to kiss her again!

All of the teachers head down to the local pub to celebrate the good news. Jack is in his office preparing to join them when Lewis smacks him on the back of the head with a fire extinguisher. He comes round to find that he has been doused in petrol and that Lewis is brandishing a lighter. Just when it looks like Jack is doomed, Steph comes to his rescue. She aims the fire extinguisher at Lewis and gives Jack the opportunity he needs to lay the bully out cold. At the pub, everyone cheers Jack and Steph's triumphant arrival... everyone except Heather of course - she can't believe that Jack has thrown her over in favour of Steph.

When Kim and Andrew arrive, the party begins in earnest. Even Mika and Chlo are included in the celebrations and they reward Tom for allowing them an illicit glass of cider each by trying their best to persuade Izzie to allow him to move in with them. He is over the moon when Izzie agrees. Meanwhile, across town, Lorna has come to the realisation that her life no longer has any meaning and climbs to the top of a canal lock. As the staff of Waterloo Road raise their glasses in celebration, Lorna removes the safety barrier and takes a step towards the teeming water below.