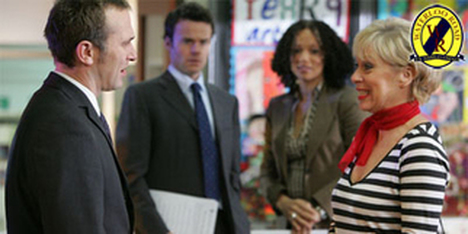 Jack, Andrew and Kim have organised an Open Day at Waterloo Road as a last ditch attempt to impress the LEA. Jack's aware that there are any number of things that could go wrong - and he's right to be worried! His problems start when school bully, Lewis Seddon takes exception to the fact that Rory Brears, an openly gay pupil, is teaching some of the Year 11 girls a dance routine. Before things can get out of hand, Kim walks in. But although Rory has gained a reprieve this time, Lewis is lying in wait next time he goes to the bathroom and flushes his head down the toilet.

Andrew is amazed when Steph Haydock brazenly swans into school in French fancy dress - he thought that Jack had decided to sack her. Andrew furiously quizzes Jack - how can they expect to change the school if they keep on teachers like Steph? Jack is forced to reveal how Steph threatened him with sexual harassment. Thanks to their brief fling, she's got him over a barrel and she knows it. Luckily though, Jack has thought of a way to turn the situation around - Steph needs an intensive refresher course in how to discipline her pupils and Andrew's the man to teach her!

Chlo is terrified when she hears from Mika that Holly has woken from her coma. Panicking, Chlo rushes to see her in the hospital and asks her what she can remember of the crash. Although Holly can remember that Donte was driving and that Chlo was sitting in the passenger seat, she doesn't remember Chlo distracting Donte by climbing into his lap. As Chlo heaves a sigh of relief, Clarence is trying to persuade Donte to sign a statement that implicates his girlfriend. Donte is reluctant - he doesn't want to get Chlo into trouble - but in the end he realises that he has no choice.

Rory is incensed that homophobic bullying is allowed to go on at Waterloo Road, and it's not just the pupils who are at fault either, Grumpy Grantly Budgen has also made his disgust very clear. In an attempt to highlight the problem, Rory decides to start a petition. On a day when he's being scrutinised by the LEA, this is all Jack needs! After Grantly finds Lewis and his gang in possession of some of Rory's gay men's magazines, Jack calls Mrs Brears into the school to discuss the problem. However, Mrs Brears is 100% behind her son and soon, the two of them are encouraging everyone to sign the petition. Luckily for Jack, LEA Inspector Heather Davenport is impressed by the petition and congratulates him for making an effort to battle homophobia within the school. Lewis responds by heat-butting Rory in full view of Kim.

To punish him for attacking Rory, Kim drags Lewis straight to the cooler. Grantly is supposed to be supervising the detention, but he's late and this provides Lewis with an opportunity to corner her. He's aggressive and suggestive and Kim begins to panic. Worried by Kim's absence from the main hall, Andrew sets off in search of her, eventually finding her in tears. He immediately guesses that Lewis has done something to upset her, but he's completely unprepared when he finds out just how out of control the school bully is. Jack is furious when he hears and decides to give Lewis a dose of his own medicine. After throwing desks around the room and frightening Lewis witless, he orders him out of Waterloo Road... for good.

At the pub, Heather congratulates Jack on all of the hard work he's done at Waterloo Road. However, she's unable to put him out of his misery regarding the potential closure of the school is concerned as the decision is still being made. Heather's had enough of talking shop and decides that she and Jack should get to know each other on a personal level. But Steph disagrees and brings the rest of the teaching staff along to spoil the party.

Izzie wants Tom to tell Lorna about their relationship. He agrees and asks Lorna to have lunch, but Lorna thinks that this could be the start of them getting back together! She is stunned when Tom asks her for a divorce. Later, Tom and Izzie find themselves alone together in the drama room and are unable to resist their mutual passion any longer. But Lorna is just around the corner and about to get a terrible shock.