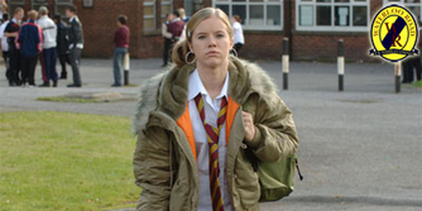 Jack is panicking about the visit today by an LEA Inspector. However, he has taken some precautions, such as arranging a school trip to ensure that the worst teacher, Steph Haydock, and the most disruptive kids are well out of the Inspector's way. Deputy, Andrew Treneman is not impressed to learn that he has to supervise them! Jack is surprised when the Inspector, Heather Davenport, turns out to be attractive and sympathetic to the pressures the school is under. However, she has a bombshell to drop: one of the schools in the area has to close and the spotlight is firmly on Waterloo Road. Jack is devastated by this news, but the more positive members of his staff rally round. Enthusiastic Kim is given the job of chaperoning Heather - will she be able to show that Waterloo Road is improving?

Izzie is totally unimpressed by Chlo's decision to steal her dad's van. Neither is Chlo when she is told that she will have to save up to pay for the repairs. Still, worse is to come when she learns that Izzie has arranged for her to see a child psychologist. During the session, the psychologist becomes convinced that Chlo has entered into a pact with Donte. However, Izzie is dismissive, refusing to believe that her daughter could keep something like that from her. At least going along with her mum's stupid idea has earned Chlo some much needed brownie points, and the return of her mobile phone.

Leaving Heather in the capable hands of Tom and Izzie in the drama studio, Kim goes to commiserate with Lorna. Although she's upset that Tom has apparently been informing all and sundry about their split, Lorna is still in a positive frame of mind. She believes that Tom moving out is a good thing, convinced that once he has to fend for himself, he'll realise what he's missing and go back to her. Meanwhile, Heather is very impressed by what she sees in the drama studio. Tom's idea to help his English class to understand 'Romeo & Juliet' by acting it out seems to be working. But Tom and Izzie's good work is quickly cancelled out by the efforts of Grumpy Grantly whose contempt for his pupils is all too obvious.

Now she's back in possession of her phone, Chlo wastes no time in contacting Donte's father, Clarence. At lunchtime, he picks her up and takes her to Donte's solicitors so that she can make her confession. But it soon becomes obvious that the pact that she and Donte made is not fooling anyone and may actually undermine his defence. Donte is devastated when Chlo and Clarence break the bad news and begs Chlo to tell the truth about what really caused them to crash. But Chlo can't go through with it; she's too scared of what might happen to her.

The school trip to the museum is turning into a complete nightmare for Andrew. Although the kids are running riot and causing trouble, his biggest headache is Steph - if she's not disappearing off to drink cups of coffee in the museum cafe, she's cornering him and making suggestive comments. Chronic troublemaker Janeece is immediately in awe when she sees the skeleton of a Tyrannosaurus Rex and Andrew is hugely gratified when she becomes progressively more fascinated by the exhibits on display. Maybe the trip hasn't been such a waste of time after all. Back at school, Heather makes it clear that she isn't about to be fooled by the fact that Steph has been sent away on a trip. She's spoken to several pupils and has seen her dismal coursework results and informs Jack that she's not impressed with his French teacher's record. She can see now that Waterloo Road is much improved, but if Jack wants the school to stay open, he must do something about getting rid of the weak-links in the staff room.

As Lorna has gone out, Izzie offers accompany Tom on his flat-hunt. They are both still struggling to fight the feelings they have for each other. But when they find themselves alone, they can't resist any longer and give into their mutual desire. Although she knows that she's betraying her best friend, Izzie finds that she is unable to hide her true feelings any longer and informs Tom that if their relationship is to work, he must tell Lorna immediately. However, when Lorna arrives home, Tom chickens out and Izzie walks out in disgust.

Jack discusses the Steph situation with Andrew and they both agree that they have more chance of convincing the LEA to keep Waterloo Road open if she is sacked. That evening, Jack calls Steph into his office and breaks the bad news to her - he's going to recommend to the governors that she be relieved of her teaching duties. Although initially distraught, Steph soon recovers herself and decides to take drastic action to keep her job, namely, by threatening to report him for sexual harassment!