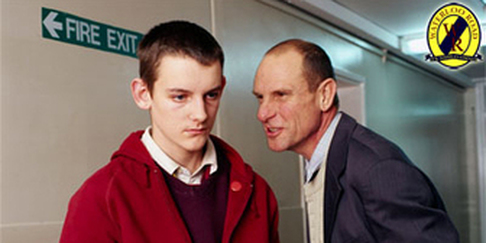 Steph Haydock is fearful of losing her job, so she fakes a break-in to her classroom and disposes of the incriminating coursework. Jack and Andrew are highly suspicious of this convenient disappearing act, but without proof, what can they do? With the prospect of an LEA visit looming, Jack must see to be doing things by the book and insists that Steph's class redo their coursework under exam conditions and under his supervision. Although she takes advantage of his brief excursion back to his office to help some of her pupils, their efforts are extremely poor and don't compare favourably to the much better marks she originally submitted.

Over breakfast, Tom apologises to Lorna and concedes that they were both at fault over her decision to abort the baby. Even though she and Tom are officially separating, Lorna is surprisingly upbeat. She decides to change her whole image and tells Izzie that it's because she needs a fresh start, beginning with some after-school retail therapy. Tom meanwhile is glad that he and Lorna are getting on well again and starts to believe that they may be able to separate amicably and remain friends.

During an English department meeting, Tom complains about having to teach Shakespeare to his pupils - try as hard as they might, they just can't understand a word of it. Andrew suggests that they avail themselves of Izzie and the drama studio - maybe if the kids act out the plays they will be able to understand them better. Predictably, Grantly jumps all over this idea. As far as he's concerned, the only way to teach kids is in a classroom, not that there's any chance of the no-hopers at Waterloo Road ever learning anything. Andrew is bothered by Grantly's defeatist attitude and accuses him of treating teaching like a 9 to 5 job rather than a vocation.

If arriving late for school wasn't enough, Zak falls asleep in one of Grantly's lessons. Grantly has had enough of his tardiness and bad attitude and confides in Andrew that he thinks Zak's problem could be drug related. Andrew agrees and takes Zak to see Kim. He's asked to turn out his pockets and both teachers are annoyed when he hands over a packet of caffeine tablets. Drugs of any description - legal or otherwise - aren't allowed at Waterloo Road and it earns Zak a spell in the cooler.

Andrew can't believe it when he is informed that Zak has absconded from school. He's now convinced that Zak is a junkie and wants him excluded from Waterloo Road for good. Kim is scathing of Andrew's attitude, even if Zak is a drug user, he needs their support, not their condemnation. Determined not to judge Zak, Kim does some detective work and discovers that his mother hasn't been turning up at work recently - maybe she's done a runner and left Zak to cope on his own. She convinces Andrew that a home visit may be in order and together, they drive around to Zak's house to find answers.

Kim and Andrew are ignored when they knock on the door of Zak's house, but they persevere and are appalled when they hear the sound of a woman screaming coming from the upstairs window. Convinced that Zak is attacking his mum, they break in through the back door and discover the secret that he has been so desperate to hide. His mum is suffering from Huntington's Disease, a hereditary disorder that affects the central nervous system. Terrified at the prospect of her being taken away, he's been caring for her single-handedly for months. Kim and Andrew do their best to reassure Zak that they will do their best to make sure that he and his mum receive all of the help and support they need.

Chlo is sticking to the pact she made with Donte and heads down to the police station to make a confession, insisting that she was driving on the night of the crash. Meanwhile, Donte appals his father, Clarence by deciding to plead guilty. Unfortunately for Donte, the police tell Chlo to go home. Izzie is shocked when she is asked to collect Chlo from the police station and pleads with her to drop it - how can she be guilty of causing death by dangerous driving when she can't even distinguish a clutch pedal from the accelerator? Realising Izzie is reaching the end of her tether, Tom offers to talk some sense into Chlo. Although he makes headway at first, Chlo quickly realises that Tom doesn't believe her either and clams up. It's time to resort to desperate measures.

After their shopping trip, Lorna persuades a reluctant Izzie to accompany her back to her house for pizzas and a drink. When Lorna goes to bed, Tom persuades Izzie to stay, telling her that they need to talk. He's still very much in love with her and although he's been trying to keep his distance, his feelings are too strong to ignore. Izzie can't resist her growing desire. However, their tender moment is interrupted by a loud noise. Chlo has stolen her father's van and has crashed it into Izzie's car.