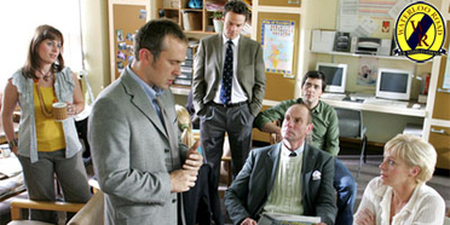 The chaos continues with Andrew's House System. The kids are running homework scams to gain house points. Captain of the Kingfishers, Lewis has recruited brainy Ahmed to make sure that their house receives top marks in exchange for cash. Little does he know that rival house captain, Janeece is also paying Ahmed to do the Canaries' maths homework and to mess up the Kingfisher's French coursework. Unaware of what's going on in the playground, Jack concedes that the scheme is proving to be a success and congratulates Andrew on a job well done. Grumpy Grantly meanwhile is as disparaging as ever, he reckons trying to change Waterloo Road is a waste of time.

Lorna's back at school after her 'miscarriage'. She's touched with how sweet Tom is being about the whole situation. Although Lorna's over the moon that her marriage finally seems to be back on track, Izzie is feeling increasingly guilty about the whole thing and is finding it hard to look Tom in the eye. But this is the least of her worries. Her unreliable ex partner, Jimmy has decided to take a stand and the pupils think it's hilarious when they see him climb onto the school roof dressed as a fluffy bunny. Jimmy wants access to his daughters and he's not getting down until she agrees. Jack can't believe it - the local press will have a field day when they hear about this!

Jack is surprised when Steph's French class marks mysteriously improve. Perhaps she's not so useless after all. Although things begin to look grim for her when, thanks to Ahmed and Janeece, the Kingfisher's results take a downward turn, she's not averse to a little bit of cheating herself. Armed with a bottle of correction fluid, she sets to work. When Steph questions him about his homework, Lewis decides to teach Ahmed a lesson. Ahmed is fast regretting ever offering to get involved, and when Lewis and Janeece each discover what the other is up to, it looks like his days could be numbered.

After a conversation with Mika, Tom finds that his suspicions about Lorna's 'miscarriage' are increasing. Izzie is uncharacteristically evasive when he asks why she accompanied Lorna to her last 'check-up', especially when he asks why she pretended to be shocked about the news when evidently, she already knew about it. After finding out from the clinic that Lorna never had an appointment with them, he decides to confront her about it. Forced into a corner, Lorna has no choice but to admit that she had an abortion. Tom is shocked and angry that Lorna could do this to him, but even more, he can't believe that Izzie could lie to him about it.

Jimmy is refusing to move from the roof until Izzie signs a contract to allow him access to Mika and Chlo. Unsurprisingly, Izzie refuses and Jimmy settles down for the long haul with a camping stove. Jack is fast running out of ideas. Keeping the pupils in over lunchtime may work in the short term, but Jimmy has enough supplies to stay up on the roof for days! Finally, Jack manages to tempt Jimmy down with an offer from Izzie - she'll speak to him with Chlo and Mika present to see if they can come up with an arrangement. Izzie offers to allow Jimmy to have the girls for a specified number of weekends and during the school holidays and Mika is delighted, but Jimmy refuses to be pinned down to pre-decided dates and insists that he be allowed to see them whenever he wants to. With Jimmy still refusing to back down, Izzie is forced to tell the girls the truth - he hasn't paid any child support since moving out! As far as Chlo's concerned, this only confirms what she already knew about her unreliable father, but Mika is devastated and tells Jimmy that she wants nothing more to do with him.

During art class, Kim asks her pupils to design a stencil for each of the four houses. Both she and Andrew are horrified when the rival schools use the stencils to graffiti every inch of the school's corridors. But at least the graffiti comes in handy when a terrified Ahmed decides to come clean - he makes Lewis and Janeece scrub it off the walls as a punishment. Lewis is humiliated and vows to get revenge. Meanwhile, Steph is horrified when Jack tells her about the homework scam - are her generous marking methods about to cost her her job? After school, she sneaks into the office and eavesdrops on Jack, Andrew and Kim discussing her. They're all extremely suspicious. What is she going to do? Back in Jack's office, a brick comes flying through the window and nearly knocks Andrew unconscious. There is no doubt that the culprit is Lewis, but can they prove it?

Izzie leaves Mika and Chlo in the drama studio while she goes to supervise an after-school football match with Tom. With her mother safely out of the way, Chlo sneaks off to visit Donte so that they can discuss their plan. They think that if they both own up to causing the crash, their pleas with cancel each other out, but will it work? Back at Waterloo Road, Tom confronts Izzie. But Izzie's got enough going on in her life and tells Tom that he and Lorna should sort out their problems between them and stop dragging her into the middle all of the time.

It is the end of another hard day at Waterloo Road and just when Izzie thinks she's sorted her life out - Chlo comes home and drops her bombshell - she was the one driving on the night of the crash.