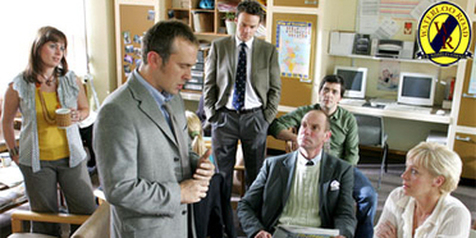 Andrew intervenes on the school bus when school bully Lewis tries to chat up a heavily pregnant girl. The girl, fifteen year old Zoe Ramsden, as well as being cocky and over-confident, is very forward and a flustered Andrew predicts trouble. Kim volunteers to speak to Zoe, but she's rather disturbed by her claims that her father is friends with headmaster Jack Rimmer. But when she makes a point of introducing Zoe to Jack, she is even more troubled by the expression on his face - it looks like he's seen a ghost! Later, Zoe visits Jack in his office and drops a bombshell that could end his career - he's the father of her child, and she wants ten thousand pounds from him by the end of the week in exchange for keeping her mouth shut.

Andrew has implemented a new house system at Waterloo Road to try and encourage a feeling of pride and healthy competitiveness at the school. But the scheme starts to backfire quickly when Janeece is elected House Captain of the Canaries and Lewis is elected House Captain of the Kingfishers. After hearing Jack joke about rewarding successful House Captains with money from his own pocket, Lewis forms the mistaken impression that there could be cash incentives involved and sets about making sure that the Kingfishers begin to concentrate on their coursework. Good results will lead to house points and more money for him. But the hard work proves too much for some and soon fellow Kingfisher, Ahmed is offering to do French homework in exchange for cash.

Steph Haydock is sure that she and Jack are sharing something special, but Jack soon makes it clear that he does not feel the same - as far as he's concerned, their 'moment' at the restaurant was nothing more than a drunken mistake. Still, at least her pupils seem to be knuckling down to their coursework, and as she receives another piece of excellent work from no-hoper Lewis, she begins to think that her haphazard teaching methods could be working after all.

Lorna's pregnancy is driving her and her husband, Tom apart. She confides in her best friend Izzie, that Tom does not want the baby - she thinks the only way to put things right is to have an abortion, but tell Tom it was a miscarriage. Izzie is stunned and thinks Lorna may be making the biggest mistake of her life. Although she tries desperately to talk her out of it, Lorna's mind is made up and she begs Izzie to accompany her to the clinic that evening. Meanwhile, Izzie's eldest daughter, Mika is still reeling from reading the contents of her mother's diary. She's now convinced that Izzie and Tom are having an affair. Although younger sister Chlo can't believe that Mika could stoop so low as to read their mother's diary, she has more important things on her mind, namely a letter from Donte.

Chlo is extremely troubled. She knows that her actions directly contributed to the crash that killed Adam and put her best friend Holly into a coma, and with Donte continuing to beg her to confess to being the one behind the wheel, she's convinced herself that she's the one to blame. Although she's already in trouble with headmaster Jack and mum Izzie for back-chatting Steph during a French lesson, she slips out of school at lunchtime and sets off to the hospital to visit Holly. On her return, she is spotted sneaking through the school gates by Andrew. When he escorts Chlo back to her lesson - English with Tom Clarkson - he is incredulous when he discovers that Tom hadn't even noticed that one of his pupils was missing! At lunchtime, he returns to lecture Tom on his irresponsibility. Tom responds by writing out a letter of resignation and handing it to Jack - he's had enough.

Jack makes it clear that he holds Andrew solely responsible for Tom's shock decision to hand in his resignation, but during their argument, Andrew comes to realise that something is very wrong with the headmaster. Jack finally cracks and tells Andrew the truth - he met Zoe seven months ago when she was working behind the bar at her father's pub, at the time, he was convinced that she was in her early twenties at the very least. He got drunk and, according to Zoe, took her back to his house. Not only does he have to come to terms with the fact that he's got a fifteen-year-old girl pregnant, he also has to find ten thousand pounds to buy her silence. Andrew is understanding and supportive, he's also adamant that Jack shouldn't allow himself to be blackmailed. Jack agrees and decides to come clean with the rest of the teachers in the staff room regarding Zoe's allegations.

Tom is ill-prepared when Zoe goes into labour in his classroom. Although the paramedics have been called, the baby is refusing to wait and soon he and Kim are delivering a healthy baby girl. Tom is immediately in awe of the baby and finds that he is developing paternal feelings - maybe he is ready to be a father after all. Meanwhile, Kim and Andrew have discovered from the paramedics that Zoe's baby is too large to be premature and therefore, it can't be Jack's. Tearfully, Zoe confesses that she made up the allegations at the instigation of the baby's father, Craig Harris - he was once expelled by Jack and is out for revenge. Although Jack's relieved that his career has been saved, he feels even better after smacking Craig in the mouth.

With Izzie otherwise occupied at the clinic with Lorna, the coast is clear for Jimmy to go against her wishes and turn up at the house to see his daughters. Although Chlo isn't interested, Mika is over the moon and joyfully heads off with him for a burger. Later, Izzie arrives home to find Chlo on her own. Although she's livid with Jimmy for defying her, it soon becomes clear that that's the least of her problems when Chlo reveals that Mika has read her diary.

Lorna arrives home to find that Tom has a romantic candlelit dinner waiting for her. He's full of apologies for his initial reaction to finding out that she was pregnant and determined to make things up to her. Lorna is stunned by the way that Tom has suddenly embraced the idea of impending fatherhood and clearly wishes that she could turn the clock back. But it's too late and now she has to break his heart with news of her 'miscarriage'.