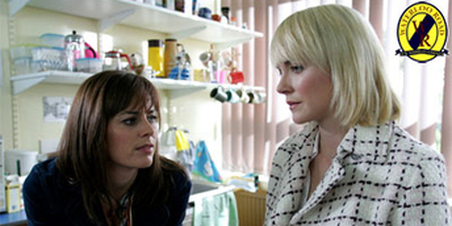 Waterloo Road Comprehensive is in mourning after a fatal car crash that killed one of its pupils, Adam, and left another, Holly, in a coma. Donte and Chlo were also in the car and are both highly traumatized and plagued by guilt. They are also both sticking to the same story, adamant that they can't remember what caused the crash, or who was driving at the time. The whole school blames them for Adam's death and the playground banter is spiked with taunts of murder. Adam's sister, Yasmin is inconsolable. She can't believe that they've let Donte back into school. With her friend Janeece egging her on, she realises that the only way that she's going to avenge her brother is by calling on the services of Waterloo Road's biggest bully, Hadleigh to make sure that Donte pays.

Izzie is still reeling from Tom kissing her at his and Lorna's wedding reception. She's already dreading the prospect of facing him and Lorna when they return from honeymoon, but things are made that much worse when Lorna drops a bombshell - she's three months pregnant. During a free period, Tom seeks Izzie out and explains that he didn't know about the pregnancy until his wedding night. Still determined not to give into her feelings, Izzie tells him to sort himself out - she doesn't love him and the only reason she kissed him was because she was drunk and upset. As far as she is concerned, the whole incident was nothing more than a stupid mistake.

Andrew is keen to implement a new system to help with the discipline of unruly pupils - the cooler. When a pupil misbehaves, they will be sent to the cooler and made to work in silence, they will also be supervised throughout the whole school day, even during lunchtime and breaks. Although Kim is quick to criticise the scheme, Jack gives it his public backing. He may have personal doubts, but he has promised that he will support Andrew's attempts to turn the school around. After he punches a classmate during Andrew's lesson, Donte becomes one of the first batch of pupils to be sent to the cooler. But maybe his punishment is a blessing in disguise - he may be in isolation, but at least he'll be safe.

Tom is finding himself increasingly irritated during the morning as one by one; his colleagues congratulate him on his impending fatherhood. Now he's a married man with a baby on the way and his life feels totally out of his control. He's also stuck in a job he hates, but when he sounds Lorna out about the possibility of resigning and then studying to be a lawyer, he is annoyed by her response - how are they going to be able to afford to bring up a child on only one income?

At lunchtime, Donte panics when Hadleigh makes it very obvious that he'll be for it after school and flees. Andrew is in close pursuit, but Donte gives him the slip and hides in a store room. Kim and Jack are furious when they hear that Donte is missing, especially when the police turn up with enough forensic evidence to arrest him for causing death by dangerous driving. Although Donte is safe from Andrew, the same cannot be said about Hadleigh. He, Yasmin and Janeece track him down to the store room and try to beat the truth out of him.

As he packs away the belongings that Donte left in the cooler, Andrew notices a letter that he has written to Adam in which he wishes that he had never stolen the car in the first place. Andrew shows the letter to Yasmin and points out that she's not the only person grieving for Adam. Touched by the letter, Yasmin reveals to Andrew that Hadleigh has left Donte tied up in the store room. Kim arrives to the rescue just as Hadleigh is threatening Donte with the knife and sends him and Janeece straight to the cooler. Meanwhile, Yasmin apologises to Donte - she knows that Adam would have hated her for what she has done to his best friend. Tearfully, Donte offers his own apology, he as good as killed Adam and he would do anything to turn the clock back.

Izzie holds her ex-husband Jimmy totally responsible for what happened to Chlo. She can't believe that he could be so irresponsible as to leave their daughters home alone and so bans him from seeing them. Jimmy responds by filling the locks of Izzie's car with superglue and then turning up in his van to give Mika and Chlo a lift home. As Izzie and Jimmy argue, Tom steams in and thumps him. Later, Lorna confronts Tom about his behaviour, but he's not interested in anything she has to say and disappears down the pub. He arrives home miserable and drunk enough to speak his mind to a devastated Lorna. He only married her to save her from embarrassment and, if he'd known that she was pregnant, he never would have gone ahead with it.

Steph is a woman on a mission and Jack is her target. After jazzing up her appearance with a new blonde hairdo, she turns up in his office and talks him into taking her out for a meal - she's acquire vouchers for a dinner for two and Jack is certainly on her menu. During the meal, Jack disappears to the toilet with Steph in close pursuit, but as she makes suggestive comments to a closed cubicle door, she has no idea that Jack is at the bar in search of Dutch courage and she is actually chatting up the head waiter! Jack arrives in the toilet in time to see the red-faced waiter emerge, once he's gone, he barricades the toilet door and drags Steph into a cubicle.

After receiving a text from Donte's father, Chlo sneaks out of the house and heads for the police station. After pleading with the duty sergeant, she is allowed to see Donte and he begs her to tell the police that she was driving the car - if they both confess to being the driver, their pleas will cancel each other out. Chlo leaves the station in tears. Outside, she remembers the night of the crash, specifically the moment she climbed onto Donte's lap, preventing him from seeing the oncoming lorry. Having been alerted by Mika, Izzie arrives at the police station just in time for a tearful Chlo to run into her arms. As she comforts her youngest daughter, Izzie has no idea that her eldest daughter is at home and reading her secret diary.