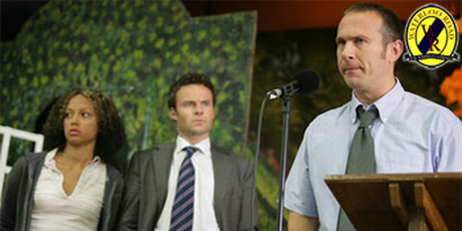 Waterloo Road Comprehensive is on the scrap heap. Its despondent teachers have given up trying to make a difference as they struggle to cope with their own personal problems as well as their nightmare day jobs.

When the current Headmaster has a nervous breakdown, Jack Rimmer is thrown into the hot seat - very reluctantly. Jack is only too aware that Waterloo Road is at the bottom of the league tables and he's under pressure to make an improvement - and fast. He takes a huge gamble in recruiting optimistic, educational zealot Andrew Treneman who wants to give up his comfortable private school job to bring the benefits of his elite education to Waterloo Road.

English teacher Tom Clarkson's life is a mess. He's about to be married to live-in girlfriend and fellow teacher Lorna Dickey and can't tell her that he's no longer in love. With the wedding fast approaching, Tom panics and hastily calls it off. Lorna is distraught and pleads with her best friend, drama teacher Izzie Redpath, to get the truth from Tom - she needs to know if there is someone else. Izzie quizzes Tom over a pint at lunchtime, but gets the shock of her life when he reveals that there is someone else - her.

Oxbridge educated Andrew is convinced that strict discipline is the only way to turn Waterloo Road around and he starts as he means to go on - on the bus on his way to his first day at school. When he sees pupil Donte Charles steal another kid's bus pass, he confronts him and insists that the police are called. Out in the playground, Donte reigns supreme, but in the real world, the police are itching for an excuse to arrest him and they do. Back at the school, Jack is incensed when he discovers that Donte has been arrested and can't believe it when he discovers that Andrew is the "daft, have-a-go hero" who made the complaint. Andrew also clashes with art teacher and Head of Pastoral Care, Kim Campbell, who thinks that he's way out of his depth with the Waterloo Road kids - and she may be right.

Izzie's youngest daughter, fourteen-year-old Chlo has been easily seduced by Donte's wild ways, much to the worry and consternation of her mother. But Donte is cool, rebellious and a hit with the girls, ideal boyfriend material as far as Chlo is concerned. But life as Donte knows it is about to change and it happens in an English lesson where once again, he and Andrew butt heads. After receiving numerous detentions, Donte calls his father - big mistake! Andrew confiscates his phone as a furious Mrs Charles listens on. Donte's father turns up at the school and begins laying into Andrew in front of all the other kids. Once again the police are called and Mr Charles is arrested.

As he has a previous record of violence, Mr Charles is bound to go down for a very long time. Kim is concerned, not least because the man is a single parent and, while he's in prison, Donte will have to go into care. After a lengthy debate with Kim, Andrew agrees to go to the police station and drop the charges, but on one condition, Mr Charles apologises for his actions in front of the entire school. Far from being relieved that his father has escape a jail sentence, Donte is furious - he can't believe it when his hard as nails old man humiliates him in front of all of his friends - there's no way he's ever going to live this one down.

After realising that he has no chance with Izzie, Tom reluctantly agrees to allow the wedding to go ahead. Although she's pleased that Lorna is happy again, Izzie's smiles hide a painful secret - Tom's revelations have forced her to come to terms with her own very deep feelings for him. But she can't break the heart of her best friend.

While the teachers relax and enjoy themselves at the reception, Donte and Chlo are both bored and stuck at home with their respective fathers. Chlo manages to convince her father, Jimmy, that she doesn't need a baby sitter and, as soon as he's safely out the front door, phones Donte to let him know that the coast is clear.

A heartbroken Izzie watches on as Tom and Lorna take the floor for their first dance. Soon the dance floor is full, amongst them, man-eating French teacher Steph Haydock is making a play for Jack - now he's headmaster, his powerful, manly charms are impossible to resist. On the other side of the room, Kim and Andrew are striking sparks off each other as they embark on a heated debate about his zero tolerance policy. Outside, Tom comes across Izzie during a vulnerable moment. After hearing that Jimmy has pushed off home and left their daughters home alone, she's been forced to call a taxi. Izzie is in tears and Tom is more than happy to provide comfort. It isn't long before they're sharing a kiss. Later in the honeymoon suite, Lorna drops a bombshell on Tom - she's pregnant.

The party comes to an abrupt end for Jack when the police call him into the school - there's been a break-in and the hall has been trashed. Disillusioned and angry, Jack rants to Andrew - he's at the end of his tether as far as the kids are concerned and can no longer see the point in carrying on. But Andrew is determined to make a difference and knows that deep down, Jack is too. Meanwhile, Donte has stolen his father's limousine and takes Chlo and his mates on a high speed joyride, but this time, his hell-raising has terrible consequences...