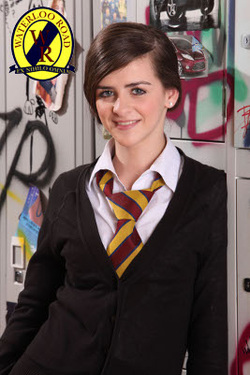 Vicki cares about her friends, is incredibly loyal, and above all is a survivor. In series six Vicki’s father was taken into a home and Vicki found herself living a very solitary life in a grimy hostel in town – something she didn’t tell anyone, not even Jess. When Karen discovered Vicky’s story she moved her into the family home which gave Vicki the chance to experience some of the family life she’d missed so desperately. But eventually Vicki is forced to stand on her own two feet and move out.

Series 7 has seen her still struggling with her personal demons – bored of her of relationship with Ronan, Vicki found herself being drawn to a flirtatious Aiden and eventually succumbed. But when Vicki discovered she was pregnant with Aiden’s baby, the truth comes out and Vicki finds herself isolated and alone. When Vicki miscarries, it’s Ronan who is there to offer comfort and support. This term Vicki throws all her energy into her schoolwork and Ronan finds himself, once again, unhappy with where their relationship is heading.