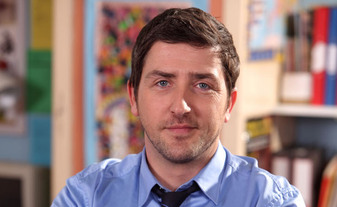 Tom’s in his late 30s and is one of Waterloo Road’s most popular teachers. The boys like him because he doesn’t push them, the girls fancy him because he’s a good-looking male teacher – but he doesn’t take his fan club seriously.  He tells himself this is education the modern way but it’s really ‘cos he doesn’t like taking a load of jotters home to mark.

Tom’s from a solid working class family with a strong belief in the importance and value of education. He developed a love of English Literature, but university was always going to be the gateway to a free and easy life for gregarious, good-looking Tom.  Teaching seemed like the best bet to avoid serious hard work and be paid for talking about a subject he enjoyed.  Tom is basically a sweet-natured bloke, eager to please and avoid conflict – but this has also become his flaw: a willingness to compromise and postpone difficult decisions.

Tom has never had a predatory attitude towards women, although WR has provided him with plenty of opportunities for love. Whilst he was dating Rose he also grew closer to her children Sambuca and Denzil – and try as he might, Tom just can’t switch that paternal instinct off. In series five Tom discovered that he had a teenage son he didn’t realise even existed.  Despite a difficult start Tom and his son Josh have grown close.  Josh lives with his father who quickly accepted his son’s homosexuality after Josh came out in series six.