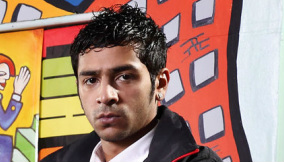 Tariq joins Waterloo Road in the sixth form. He is the eldest child of immigrant parents. Despite being born after his parents moved to the UK, Tariq has a large chip on his shoulder about the ‘West’, accusing the UK of belittling and undermining his culture and religion. Tariq has always been a handful for his parents who themselves embraced UK life. Although smart, he’s mouthy, disrespectful and disruptive and occasionally uses his religion as an excuse for his behaviour. Following the death of his mother, Tariq’s behaviour worsened and saw him fall in with a gang, getting mixed up in petty crime which resulted in him spending long stretches of time inside a Young Offenders Institute.

The shame that Tariq has brought on his family has left deep scars within the family, who are now on the verge of giving up on him altogether as a lost cause. His younger sister Trudi is weary of the bad reputation he brings to the family name.

He joins Waterloo Road having been released from a Young Offenders Institute where he was doing time for ABH. He’s every teacher’s worst nightmare. Reluctant to integrate with his peers, disruptive with an unpredictable violent streak makes disciplining him a nightmare.  Tariq knows this is his last chance, one more foot out of place and he’ll be back inside and lose his family forever. Will Michael’s tutelage finally see Tariq change his ways?

In series 7c Tariq gets involved in Kyle Stacks gang, the DSC. It causes nothing but trouble for himself, his sisters and his school.