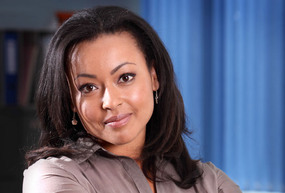 Sian is a hit in her role as Science teacher and Deputy Head at Waterloo Road. Behind the science goggles is an intelligent, sparky and sexy woman, capable of making science appealing to the masses. She worked with Michael at his previous school where the two were once romantically linked.

She’s married to meat-head Jez. Although loved-up, she’s the more sophisticated one in the marriage and is less comfortable with Jez’s determination to share the love with his overt displays of affection. Add to this, Sian’s embarrassment when their shady past becomes public and it is revealed that she was responsible for splitting up Jez’s family. Afraid of confrontation and of facing the truth, guilt drives Sian to connect with her new step children.

As her post-marriage excitement wanes, Sian will find herself connecting with Michael on a more intellectual level and it soon becomes apparent that there is still a strong mutual attraction between them