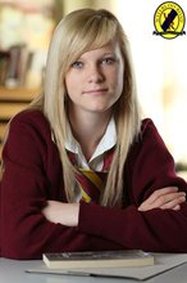 Named after her mum's favourite drink, thirteen year old Sambuca is essentially a good kid who doesn't stand a chance in her current environment. That's not to say she's particularly easy to teach, she's got an opinion on everything and lacks manners.

Sam is very close to Tom Clarkson and has considered him a surrogate dad, even after his relationship with her mother Rose ended in series five.  With Earl in prison and Marley off at University – Sam and Denzil have become their own tight-knit unit.  Sam’s best friend is Lauren and the two of them were exceptionally close, that was until Sam ditched her to spend an entire summer hanging round with her boyfriend.  In that time, Lauren and Amy became mates and series six saw a power struggle between Amy and Sam as both of them battled to gain Lauren’s attention.

Series seven sees Sambuca facing bigger issues as she is diagnosed with an inoperable brain tumor and if forced to face the fact that she is going to die. Before she died she set out on a mission with boyfriend Finn and best friend Lauren, to find her father. They went on a day trip to Blackpool but were unsuccessful. They decided to stay in Blackpool for the day and let Sam have one more day frreedom. Later that evening Sam died in the arms of her mother, Rose Kelly and Tom Clarkson.

Reason for leaving
Sam died after a battle with cancer.