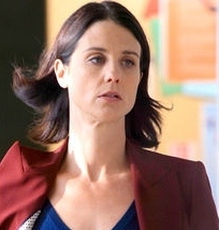 Miss Boston joined the teaching staff in series 7c. At first her character was disliked by the pupils and most of the teachers because of her unique way of teaching. She was unlike every other teacher at Waterloo Road as she was very insensitive about the childrens issues and saw them as being there to learn.

She competeted for the Head of English job along with another teacher and was unsuccessful. But after her assessment she showed great initiative as a gang row broke out in the school grounds. Nikki jumped in and prevented it going any further. Tom and Michael then reconsidered their decision and offer Nikki the job.

Since spending more time at Waterloo Road Nikki became very close with Tom Clarkson and his son Josh. She helped them deal with Josh's schizophrenia and was a fantastic shoulder for Tom to cry on.

Miss Boston will return in series 8, despite the rumours that she has a breakdown.