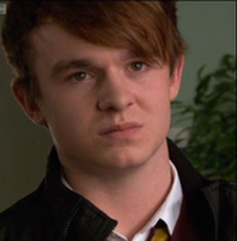 Nate is 15, confident, charismatic, clever, articulate and with a shy, quiet sort of charm that wins people over, especially girls. He’s seemingly very comfortable in his own skin. He's also gay - although not at all camp, and his sexuality is not quite public knowledge in Waterloo Road. Maybe that's one of the reasons that most of his friends are female - or maybe it's that he dresses better than any other lad in the year, he's got the best hair, and unlike most of his peers he knows how to communicate with a girl beyond pinging their bra strap. Plus he's really, really fit and he doesn't even know it. What he hasn't really got is a best friend - he seems to keep people at arm's length.

He leans towards maths and science subjects but his real interests lie in his extra-curricular activities which are all arty - drama, music, film.  He can often be found in the art room, or practising guitar, happy in his own company. He's into books and politics and stuff, not that he's daft enough to let people see that too often. Most of all he loves his music - he's a total indie kid - an obsessive retro vinyl junkie, he writes a music blog, plays guitar and he's always trying to get bands together. His ambition is to make it with his own music, but unlike most kids you can actually believe that Nate might do it.

It's no wonder that Josh falls for Nate. They bond over music, Nate's latest effort at a band having just collapsed and him persuading Josh to form one with him. They spend most of the rehearsal time talking instead of playing and begin to realise the strength of their feelings for one another. Nate seems comfortable in his own skin and Josh admires that. With Finn still not really getting it, he is desperate for a friend who understands what he's feeling. Not to mention someone he fancies the pants off. As for Nate, perhaps he doesn't mean for it to develop with Josh as far as it does but he can't get him out of his head - Josh just gets him. Nate just wants to know him better. Better than anyone.

Yet Josh feels that Nate won't quite let him in. Like he's always holding something back.

Reason for leaving
Unknown. But believed to have left school.