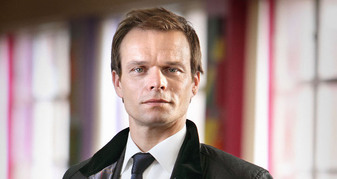 Michael Byrne is an award-winning, dynamic, media-friendly ‘Super Head’ teacher (former science teacher) who has earned himself a fearless and high profile reputation in the media after famously surviving a vicious attack by a student. Rather than turning his back on teaching, he’s dedicated his life to successfully improving failing schools through a promise to never let the past stand in his way.

Like many of Waterloo Road’s pupils, Michael grew up on a rough council estate, raised by a single mum struggling to provide the right levels of emotional and material support. He quickly fell into a life of truancy and gang-fighting.  Facing a future of unemployment and crime, it wasn’t until he was challenged to aim higher by one particularly inspiring and persistent teacher that he finally decided to turn his life around. It’s exactly this kind of inspiration that Michael has spent the rest of his life trying to provide at the schools he’s worked at and gives him the belief that every pupil has the potential to achieve regardless of their background.  Michael went directly into teacher training from university and with a head for heights, gained his first role as Head Teacher by the time he was thirty-two.

But his success doesn’t come without hard work, with Michael often working a 16 hour day.  Like most workaholics, he needs to let off steam and as hard as Michael works, he plays; often drinking late into the night. Despite being a self-confessed commitment-phobe, this doesn’t stop women being drawn by Michael’s powerful charisma; as far as Michael’s concerned, let them get too close and they’ll try to change him and right now he’s more than happy with where he’s at, opting for the single life but how long will that last?