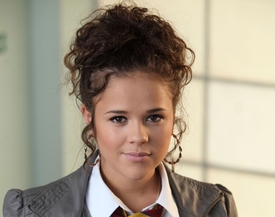 Lauren is Sambuca Kelly’s best mate. Her parents own and run ‘The Coffee Stop’ a bustling café in town, where Lauren has helped out at weekends for as long as she can remember, using her money on the latest looks and hair products – always eager to look older than her fourteen years. The youngest of four children – all her siblings being much older brothers – she learnt at a young age to be a gobby little cow as it was the only way of being heard above her brothers and cope in such a testosterone filled environment. However, underneath the lippiness, Lauren can be pretty impressionable and easily led. When Sam first arrived at Waterloo Road Lauren hated her and her family on sight – snootily writing them off as a bunch of skags. She soon learned there’s a lot more to Sam than meets the eye and the two became firm friends. She now tries never to judge any book by its cover … but when someone’s hair is a crime against fashion it can be very tricky…

Their relationship struggled after Sam became obsessed with her new boyfriend in series six, but series seven sees them grow closer than ever as Lauren helps Sam cope with the news of her terrible diagnosis.

At the beginning of series 7 Lauren had her sights set on being a model. After being unsuccessful at her audition she began to re adjust her thoughts on her future and knuckled back down to her school work. When she found out about her best mate Josh's schizophrenia she was a massive support to him and helped him through his horrible situation.