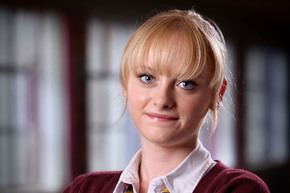 Jodi, better known as Scout, lives with her mother and four year old brother Liam in a squalid flat on a rundown estate.  Her mother doesn’t work and the benefits she receives are not enough to cover the debts. Scout’s father left some years ago and has no contact. Scout provides for the family in any way she can, stealing food, doing a paper round and working for as a courier for the local drug dealer.

Scout is a small and dishevelled tomboy with a quick wit and sharp humour. Potential bullies give her a wide birth for fear of being humiliated by her cutting observations. A modern day artful dodger, Scout knows all the tricks to get out of trouble, spinning complex yarns at the drop of a hat to outsmart her accusers whether it’s teachers, police or fellow pupils.  She has bundles of energy and when she washes down packets of Smarties with bottles of limeade doesn’t everybody know it!

Scout is a match for any teacher and will give them relentless lip, but it is never malicious and her charm keeps her out of the cooler for the most part. Scout is a very intelligent girl who scores consistently high marks across all subjects - marks that have started to drop over the last couple of months.

Scout’s bravado is a smokescreen.  As long as people are laughing at the people she is poking fun at, they are not looking at the tatty state of her uniform or asking personal questions.  She is well liked and is friends with Denzil and Em, but she keeps them at a distance for fear that the poverty of her home life will be exposed.  Underneath the child-like antics, Scout is a girl who has been forced to grow up too quickly and take on responsibility for a struggling family.

Scout and Liam were put into foster care despite Chris’s attempts to help when their ineffectual mother left them home-alone.

In the latest episodes Scout and Em embark on a friendship that will take them on a journey of rebellion and fun until Em takes it a step too far, leaving Scout questioning the morality of their actions. Could this mark the end of their friendship?

In series 7c Scout is set up by her mother to marry Ukrainian immigrant, Danilo. Scout thinks her mother is finally showing an interest in her so goes along with the wedding. She later finds out Danilo's father paid her mum £5,000 for the marraige so his son could get a visa to stay in the UK. Scout then tells her mother that she never wants to see her again.