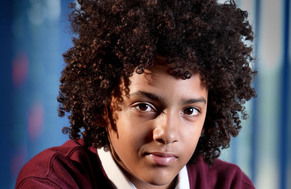 Harley Taylor lives in the shadow of his older brother.  Harley is trying to be just as ‘bling’ as Phoenix, but it’s all an image out of step with the real Harley – a vulnerable and more insular boy.

Harley came to dote on his Nan.  He would spend hours at night playing cards with her or simply sitting together reading. When she dies Harley is haunted by her death and struggles to come to terms with it.

Having always had Phoenix or his Nan to make decisions for him, he is a little too gullible. Harley yearns for affection and with the death of his Nan, he will search for it in his father. But in looking up to his father, Harley opens himself up to manipulation which could see falling out with his brother.

In series 7c, Harley brings out a soft side in Grantly and we see him bond with a student like never before.