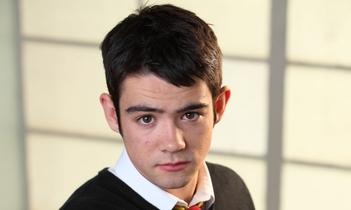 Finn is Waterloo Road’s bad boy.  Introduced in Series 5, where he almost convinced Amy Porter into a suicide pact, Finn has not had an easy life.  Finn’s parents are often absent, and he often lives on his own.  Finn relies on his friends and girls to feel secure.  Finn knows he wants Jess Fisher from the moment he lays eyes on her, but Josh isn’t convinced she’ll go for a year 11.  But then Finn and Josh have their own problems, when Josh tries to kiss him and it comes out that he’s gay.

Finn has never been comfortable in his own skin, but in series six a tentative romance began between him and Sambuca and for the first time, Finn found a girl who was actually a stabilising influence.  When Denzil began veering off the rails, Finn really tried to help get his head straight, even rescuing from a potentially life-threatening prank, which put Finn in hospital unsure of whether he’ll ever walk again.  Deep down this bad boy wants to be good. Series 7 sees him struggle to come to terms with Sam’s diagnosis and question whether he’s brave enough to be at her side until the end.

Finn is still trying to come to terms with the loss of Sambuca and move on with his life. Can new pupil, Trudi Siddiqui, be the girl to help him get over Sambuca?

Series 7 begins very well for Finn, his relationship with Trudi is still going strong and he successfully gains the 'Head Boy' role in the school. Although Finn and Trudi are happy together, Trudi's brother Tariq will do anything in his power to split them up. When Trudi finds out she's pregnant with Finn's baby Tariq finds his perfect oppurtunity. He causes huge conflict between the pair and drives them apart. With the anger from this Finn joins Tariq's rival gang and causes nothing but trouble for himself and the school.