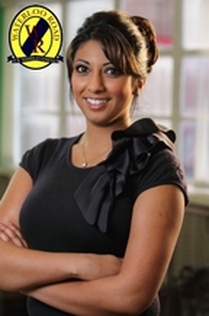 Eleanor arrives at Waterloo Road with fantastic references: ‘Grab her.’ and an exemplary record from her probationary years.  She’s ultra-professional, faux posh and has a very ‘stuff and nonsense’ approach to the children.   She hates touchy-feely teaching and almost nurtures an ‘us and them’ approach.  Eleanor makes it clear from the off – she wants to be a head teacher as soon as the system (which she abhors) allows.  Karen’s very proud of herself to have ‘bagged’ her.

However, despite Eleanor’s professional distancing from the children, she’s the kind of teacher of whom parents will say ‘Thank God she’s at our kids’ school.’  She’s got a huge self-belief that she can change things.  Her mother’s told her she can achieve anything.  Her major problem is - she takes on too much and struggles to keep all her plates spinning.

Eleanor has the skin of a rhino and her total lack of self-awareness often causes her to rub people up the wrong way.  Eleanor doesn’t hold back on her opinions – which get right up Grantly’s and Tom’s noses.  Eleanor’s biggest flaw is her unquenchable ambition.  She’s blinded by her Machiavellian need to get ahead and will trample over people if they happen to stand in her way, including Karen Fisher…