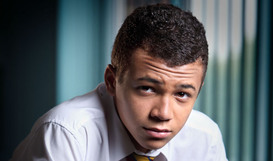 Denzil worshipped his criminal big brother, Earl – an unhealthy relationship which resulted in Denzil carrying the can for Earl’s psychotic behaviour and spending a period in a Young Offenders Institute.

Denzil struggled to adjust to Waterloo Road and has behavioural problems which are a result of his chaotic family environment and having always been labelled ‘thick’ by peers and adults alike. Far from being stupid though, he’s actually very bright, in his own cheeky way.  Denzil sometimes struggles to fit in and often finds himself ‘playing the big man’ but it’s all an act and he’s soft as marshmallow on the inside.

Denzil's life turned upside down after the unfortunate death of his sister Sambuca Kelly. Having to come to grips of the loss of his sister, he felt unwanted and useless in life.

When Waterloo Road was closed in series 7, Denzil was given the oppurtunity to come to Scotland with some fellow students and teachers to start at the new school. Before arriving he asked if he could stop at the border to get a photo to send to his nan. Just as the photo was being taken an out of control truck came speeding towards him and his fellow students.

Reason for leaving
Denzil was hit by a truck and died.