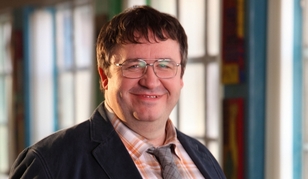 Chalky is an accident waiting to happen. Nervy, with a bad haircut and old fashioned clothes, the minute he steps into a classroom every kid smells an easy kill.  Incredibly bright and academic, on paper Chalky is every head’s dream.  In reality he’s completely detached from the real world, out of date and out of touch – but only in his late 30s.

Chalky comes to Waterloo Road, straight from the all-boys school and despite being on the receiving end of many a joke and prank, Chalky got by as a teacher – even gaining the respect of much of the class, simply through knowing his subject so well.  Maths suits Chalky.  It requires no opinion, no emotion and no modernisation. Equations will always be equations, they don’t follow trends, or require an understanding of popular culture – of which he has none.

Chalky has become a bit of an oddball.  His main problem is women.  He’s never had a girlfriend, never been in love.  Coming to Waterloo Road he faces the biggest and hardest challenge of his career – teaching highly sexualised teenage girls, and he’s terrified.

Series 7A, saw Chalky struggle with class discipline to the point where he almost hit for a pupil, but with guidance from Rob Scotcher and unlikely ally Janeece, Chalky has managed to instil some kind of order, respect and discipline to his classes.